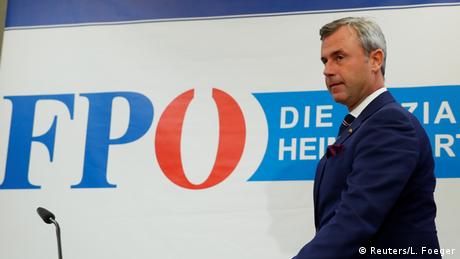 Hofer then confirmed his departure in a statement on Tuesday evening.

"My own journey at the helm of the FPÖ has come to an end today. I wish my successor in this position every success for the future," the statement said.

It is unclear who will take over the reins of the party, or how long any succession plan would take.

Hofer, who became leader in September 2019, has just spent nearly a month at a physiotherapy clinic receiving treatment for a back injury sustained during a 2003 paragliding accident.

Hofer drew the ire of Austria's Muslims in June, when he said that the Quran is more dangerous than the coronavirus.

During an election rally in Vienna, Hofer said: "I do not fear the coronavirus. The coronavirus is not dangerous. The Quran is much more so."

Only last month Hofer had refused to rule himself out of the running to be the far-right party's presidential candidate next year.

But Austrian media report that a clash with another leading FPÖ figure had forced his hand.

Herbert Kickl, who served as Austria's interior minister from 2017 to 2019, said last month that he plans to run as a top candidate in the next parliamentary elections.

He is also reported to be interested in putting his name forward to be the next head of state.

The move by Kickl, the executive chairman of the FPÖ, angered Hofer, who decided to quit his position as party leader.

Hofer ran for the Austrian presidency in 2016, missing out to the Green-backed candidate Alexander Van der Bellen.