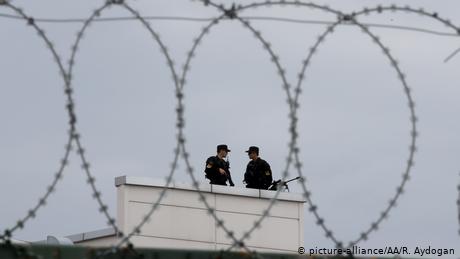 Since a failed coup in 2016, dozens of people accused of belonging to Gulen's network have been returned against their will — especially in the Balkans and Africa.

What was reported about the operation?

While the report did not say which country Selahaddin Gulen was arrested in, he was believed to be living in Kenya.

The agency published a photograph of the suspect in handcuffs with a Turkish flag on either side of him.

It remained unclear if the MIT operation took place in agreement with the country where Selahaddin Gulen was captured.

Legacy of a failed coup

The forced repatriation, if confirmed, would be the latest in a series of similar incidents involving people accused of working on Fetullah Gulen's behalf.

Gulen, a former ally of Turkish President Recep Tayyip Erdogan who now lives in exile in Pennsylvania, denies accusations of involvement in the failed coup attempt.

However, Turkey has designated his movement a terrorist group, naming it the Fethullahist Terror Organization, or FETO.

Factions within the Turkish military used tanks, warplanes and helicopters in an apparent attempt to overthrow Erdogan in July 2016.

Fighter jets bombed parliament and other sites in the Turkish capital, Ankara. Some 251 people were killed and around 2,200 others were wounded.

About 292,000 people have been detained over alleged connections to Gulen, according to Turkey's interior ministry, with Turkish authorities still regularly making arrests.