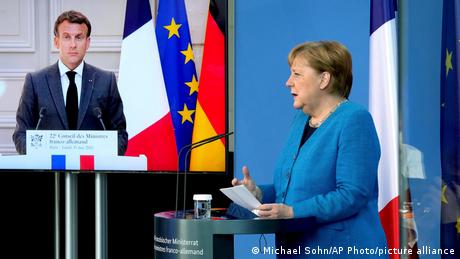 Chancellor Angela Merkel on Monday opened her last Franco-German Ministerial Council meeting. It was the 22nd installment of the twice-annual summit and covered a range of topics, such as increased bilateral industrial cooperation in the health care sector, the negative impact of the pandemic on both countries' economies, EU and foreign policy, and international crises such as Belarus and Israel.

Prior to the meeting, Merkel spokesman Steffen Seibert spoke of the "incredibly close cooperation" Berlin has enjoyed with Paris during Emmanuel Macron's first four years as French president. Seibert pointed to Franco-German Treaty on Cooperation and Integration, signed by Merkel and Macron in Aachen, Germany, on January 22, 2019, as a "major achievement" that lent new impetus to work on defense and environmental projects.

Paris, for its part, pointed to the €750 billion ($915 billion) European coronavirus recovery plan known as NextGenerationEU as the "high point" of Franco-German cooperation.