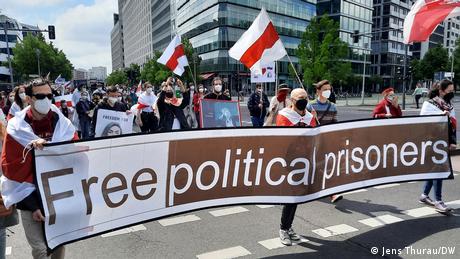 Anton Niadzelka lives in Berlin, but his heart is in his homeland, Belarus. The last time he visited the capital, Minsk, was two years ago. The 31-year-old mathematician has lived the last ten in Potsdam, a city just outside Berlin. In April, he took over the chairmanship of Razam ("together," in Belarusian), a Belarusian cultural nonprofit based in Germany.

Razam's 220 members have one goal: Help end the autocratic rule of Alexander Lukashenko, no matter how improbable that may seem.

"We're taking care of those in prison," Niadzelka told DW. "We collect donations and send them to Belarus to help families there. We distribute information and hold discussions with governments around the European Union."

Razam also looks after those who have fled, but "with the air routes blocked, that has become more difficult," Niadzelka said.

State-sponsored terrorism in the sky

The EU has ordered a halt to air traffic with Belarus since last week's forced landing of a Ryanair flight, which led to the arrest of leading opposition figures who were onboard, including exiled journalist and activist Raman Pratasevic, as well as his girlfriend Sofia Sapega, a Russian citizen.

Razam gathered around 300 people last weekend at Berlin's busy Potsdamer Platz to protest what it considers an act of state-sponsored terrorism.

"This hijacking is just the beginning," Heinrich Kirschbaum, a Slavic literature professor from Freiburg, Germany, told the protesters. "Lukashenko's crimes affect all of Europe, not just Belarus. He's becoming more and more unpredictable because he knows he can get away with it. Like he has for 27 years."

Whether organizing demonstrations or events, or networking with likeminded groups, Niadzelka does what he can from here to support the opposition in Belarus. He has mixed feelings about the EU's quick response to stop air traffic to Belarus, which he sees as a means to prevent something similar from happening again.

"But of course we'd like to see people from Belarus still be able to fly here."

Sanctions for companies linked to Lukashenko

Niadzelka would like to see sanctions against companies that he says exist only to line the Belarusian president's pockets. The EU has refused to recognize Lukashenko as the legitimate leader of Belarus since last summer's elections were deemed neither free nor fair. Mass street protests against the result have been met with state violence and the jailing of some 450 people, according to Razam. Some of them were pictured on a large banner at the weekend demonstration in Berlin.

The latest round of civil unrest in Belarus recalls a similar bout of popular anger about ten years ago, when the country teetered on bankruptcy and was crushed by massive inflation. Then, as now, Lukashenko held onto power with the help from Russian President Vladimir Putin.

"[Lukashenko] can see that he has fewer people within his security services standing by him. The economy is in bad shape. He doesn't have much money to pay back debt," Niadzelka said. "In 2011 he was able to get everything quickly under control. That's not the case this time around."

Niadzelka hopes to see the mass protests in Belarus continue to grow, as they are in Germany, but he worries it is getting harder to do so. That is why he and his friends wear photos of those in jail, speak to the media, and reach out to allies across Eastern Europe and Russia. Everything is for the goal of ending the decades-long reign of the man often referred to as the last dictator of Europe.