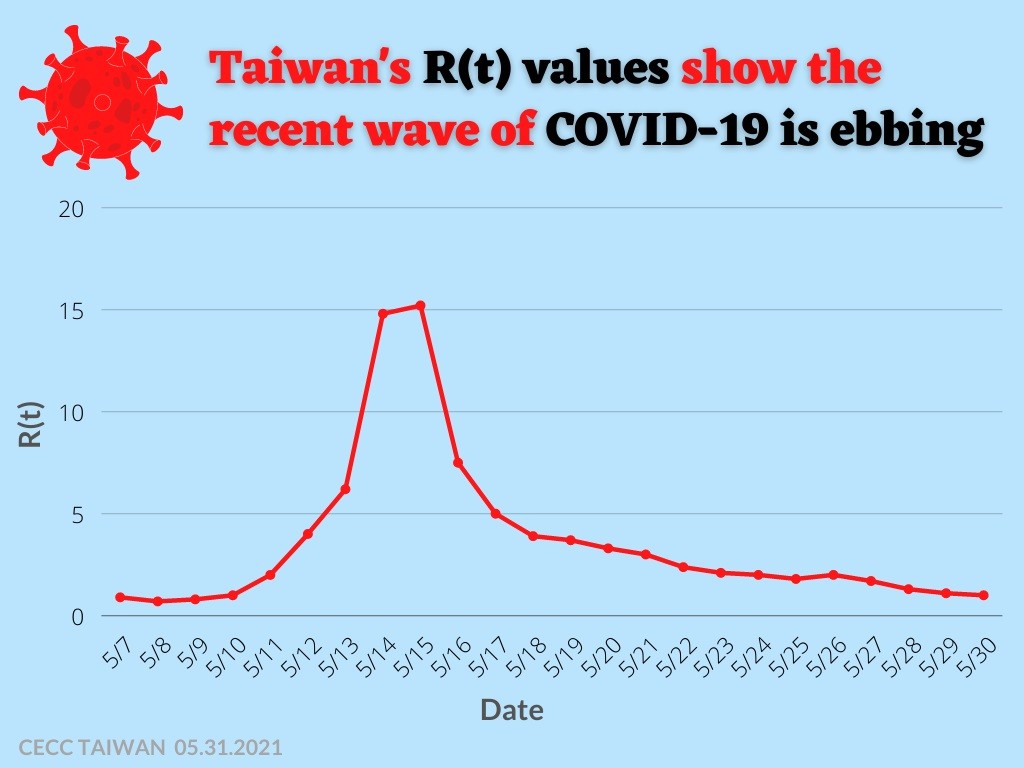 TAIPEI (Taiwan News) — Since Level 3 restrictions were imposed in Taiwan around two weeks ago, the country's R number has dropped to 1.02, which the Central Epidemic Command Center (CECC) considers to be a sign the epidemic is becoming manageable.

Although Taiwan has reported over 7,000 new local cases in just three weeks, CECC head Chen Shih-chung (陳時中) said on Monday (May 31) that since a Level 3 alert was launched on May 15 in Taipei and New Taipei and across the country on May 19, the epidemic situation is moving into a "controllable range." He said that Taiwan's R number between May 13-15 hit a peak of 15, which is the same level of infectiousness as measles.

However, he said that from Sunday (May 30) to Monday, the R number dropped to 1.02. Chen said this shows the Level 3 guidelines are having an effect, but the country must actively maintain these measures to reduce the R number to below 1.

CECC Spokesman Chuang Jen-hsiang (莊人祥) explained that R is short for the basic reproduction number (R0). In the absence of herd immunity, R measures the average number of persons one individual with the virus can infect.

The larger the R number, the more difficult it is to control community transmission. Chuang said the current R number of 1.02 means that one confirmed coronavirus case will likely infect an average of 1.02 persons.

Chen said the current strategy is to review measures implemented under the Level 3 alert and address any deficiencies. He said that one of the goals is to reduce the time from onset of symptoms to quarantine, with the shorter the timeframe, the more the outbreak can be controlled. If Taiwan can bring the R number to below 1, "it means the epidemic can be reversed," said Chuang. According to Chen, for Taiwan to lower the R rate further, "Everyone must work hard. Wear masks and wash your hands. Do not go out to family gatherings and minimize unnecessary outings."

In an apparent reference to the hostess bars in Wanhua, where many recent COVID infections occurred, Chen told members of the public to avoid such adult entertainment venues. "If there is no demand, there won't be any supply."

He said the avoidance of such places will break the transmission chain and called on "everyone to keep up the good work."