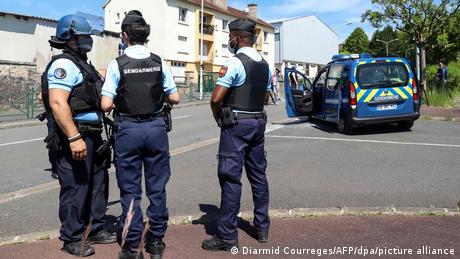 Security forces were combing southwestern France on Monday for a former soldier who allegedly fired at a patrol responding to a domestic violence call the previous evening.

The manhunt for the 29-year-old, who is armed with a hunting rifle, could last "many more hours", according to gendarmes — France's paramilitary police.

Elite tactical teams and some 300 gendarmes were sweeping through a forested area in the Dordogne region to look for the gunman with the help of seven armored vehicles, seven helicopters and sniffer dogs.

"Combing the area will be long and painstaking... It could take many more hours yet," Dordogne prefect Frederic Perissat told reporters.

Escaped while wearing an electronic bracelet

The man fired at the police after attacking his former partner's new boyfriend in Lardin-Saint-Lazare, a village near Sarlat.

Perigueux prosecutor Solene Belaouar told the media that the man had been convicted of domestic violence four times.

He was also wearing an electronic bracelet when he fled on Sunday.

The suspect could have the profile of someone who wanted to be killed by police, the commander told the France Info radio station.

'The goal is to bring him alive'

Prefect Perissat said that they had established contact with the gunman several times but each time he opened fire.

"We are doing everything we can to get him to surrender but we also want to avoid a tragedy within our ranks," added the police representative.

"The goal is to bring him alive. If we wanted to neutralize him we would have already done it," he said.

In the meantime, people have been advised to remain home on Monday as the search continues.

The news of the manhunt comes two weeks after a similar case in Belgium, when a soldier stole weapons from an army barracks and went on a run after threatening a well-known virologist and other public figures. Belgian authorities have not been able to capture the man, with some military personnel expressing their support for the fugitive online.