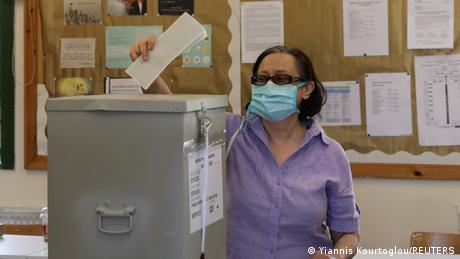 Cypriots voted on Sunday to elect a new parliament amid public anger over the so-called golden passports corruption scandal in the country.

Fifteen parties contested the elections and about 65.73% of nearly 558,000 eligible voters cast ballots for the 56 Greek Cypriot seats in parliament. Voter turnout was 1% less than the previous poll.

Amid growing voter discontent with traditional parties, the far-right ELAM party and a centrist splinter group made big gains in the election.

'The result isn't what we expected'

With 100% of votes counted, the far-right ELAM secured 6.78% of the vote, a 3% increase from the previous election in 2016. ELAM began as an offshoot of Greece's extremist Golden Dawn party.

The centrist DIPA won 6.1% of the vote. It is made up of key figures who left the center-right DIKO party, traditionally the third biggest political outfit in the country.

The center-right DISY came first, winning 27.77% of the ballots. It's 5.4% more than their closest rival communist-rooted AKEL. But both parties took a hit, securing less votes than what they got in the previous election.

"The result isn't what we expected," AKEL General-Secretary Andros Kyprianou told a party rally. "We respect it and we'll examine it carefully to draw conclusions, but we can now say that we failed to convince (our supporters)."

The parliamentary election won't affect the running of the government, as executive power rests with the president, who is elected separately.

Even so, the vote is seen as a gauge of the popularity of President Nicos Anastasiades, whose term expires in 2023.

The election came after a corruption scandal involving the so-called golden passports scheme came to light last year. Under the scheme, EU passports were issued to people in exchange for large investments.

An independent investigation into the program found that the government unlawfully granted passports to thousands of relatives of wealthy investors, even to those with a criminal past.

The nation's parliament speaker, Demetris Syllouris, and an opposition lawmaker had to resign after they were secretly filmed allegedly trying to facilitate a passport for a fugitive investor.

They both rejected allegations of any wrongdoing.

Cyprus divide moved to the sidelines

The decades-old division between the island's Greek and Turkish-speaking communities unusually played little part in this year's election campaign.

Cyprus' parliament in the capital Nicosia is supposed to have 80 members, but it currently has only 56 Greek Cypriot lawmakers. The 24 seats for the Turkish Cypriot members of parliament have been vacant since 1963.