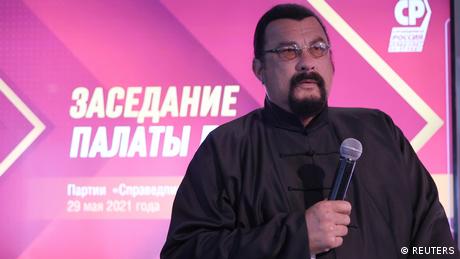 The party was established earlier this year with the merger of three leftist parties. The Just Russia alliance controls a faction in the Russian parliament and plans to take part in parliamentary elections in September.

Seagal, best known for action films such as "Above the Law" and "Hard to Kill" has been a Russian citizen since 2016. He still holds US citizenship.

What are his political goals?

Speaking at a party ceremony on Saturday, the 69-year-old actor and martial artist said he wanted to take action against businesses that damage the environment.

"Without being able to arrest people, when we just fine them, they are probably making more money off the production of the things that are defiling the environment," he said.

Seagal also posed for photos with Russian writer Zakhar Prilepin, one of the party's leaders. Prilepin is known for joining the pro-Russian separatists fighting against government forces in eastern Ukraine. The conflict, which broke out in 2014 after Russia's annexation of Crimea, has killed 14,000 people.

As a Russian representative, Seagal was tasked with improving ties with the United States in 2018, while earlier this year he traveled to Venezuela to present a samurai sword to embattled leader Nicolas Maduro.