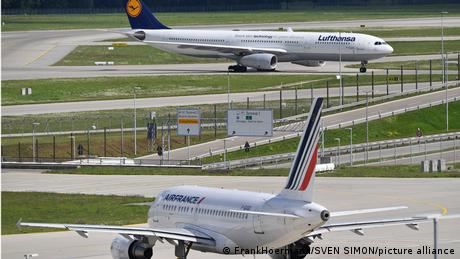 Air France and Lufthansa on Saturday said they have received approval from Russia for flight routes to the country that avoid Belarusian airspace.

Air France, which operates one or two flights a day between Paris and Moscow, said its new flight path was put into operation on Saturday for this weekend.

However, a spokesman said the French flag carrier was still awaiting confirmation that the new flight path can also be used from next week.

"We ... are awaiting a green light from Russian authorities for our flights after this weekend," a spokesman said.

A spokeswoman for Lufthansa said it had been given approval for the new routes on its flights from Frankfurt to Moscow and St Petersburg for the foreseeable future.

Airlines have been scrambling to agree on new flight paths after EU leaders urged airlines not to use Belarusian airspace in the wake of the May 23 forced landing of a Ryanair jet by the Belarus government.

The plane was grounded on the pretext of a bomb threat and a Belarusian MiG-29 fighter escorted the passenger jet to Minsk airport where dissident journalist, Raman Pratasevich, was arrested.

European leaders have accused Belarus of state-sponsored piracy and also barred Belarusian carriers from the bloc's airspace, prompting cries of a "despicable" response by the head of the Belarusian national airline Belavia.

In a post on his Facebook page on Saturday, Director Igor Tcherginets said such steps amounted to sanctions on the carrier, which he described as an innocent party in the affair.

"All this is happening before an investigation of the incident, for which there may be some guilty parties, but Belavia is definitely not among them," he added.

Belarus has faced international sanctions in the wake of the violent crackdown on the protest movement against strongman Alexander Lukashenko's rule. His opponents say his election win last August was fraudulent.

Earlier this week, Air France and Austrian Airlines had to cancel several flights to Moscow because they hadn't yet confirmed an alternative flight path with Russia.

Meanwhile, the International Civil Aviation Organization is mulling an investigation into the forced landing amid claims Russia was involved.