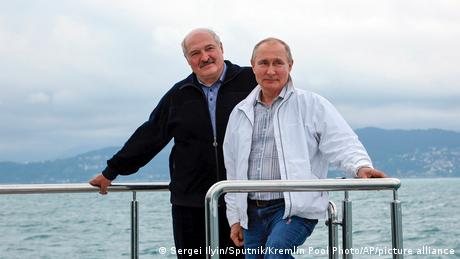 Russian President Vladimir Putin took Belarus strongman Alexander Lukashenko for a boat trip on Saturday as the pair met for a second day of talks amid outcry over Minsk's decision to force a plane to land last week, and arrest a dissident blogger.

"Yesterday was the day of official talks and today it's informal," Kremlin spokesman Dmitri Peskov told reporters about the meetings in Sochi, a city on the Black Sea.

Putin and Lukashenko took advantage of "the fine weather" and went "on a boat trip," the spokesman continued.

Saturday's talks had centered on economic cooperation and the coronavirus pandemic, according to Peskov.

Putin was keen to show his longstanding ally support over the latest standoff with the West.

Last Sunday, Minsk forced a Ryanair plane, which was en route to Lithuania, to land in the Belarusian capital, where authorities arrested Raman Pratasevich, a blogger critical of Lukashenko's government, and his 23-year-old girlfriend.

The West has since decried the decision to force the jet to land.

Putin and Lukashenko did not shy away from the events of last Sunday.

"Lukashenko provided his counterpart detailed information about what happened on board the Ryanair aircraft," Peskov confirmed.

The Kremlin was "not indifferent to the fate" of the detained blogger's girlfriend, Sofia Sapega, a Russian national, the spokesman added.

Meanwhile, it was confirmed Russia will move ahead with a second installment of a $1.5 billion (€1.23 billion) loan to Belarus.

Moscow gave Minsk the first $500 million last October, aimed at stabilizing its neighbor, with the second tranche set to be received before the end of June, both the RIA and Interfax news agencies reported.