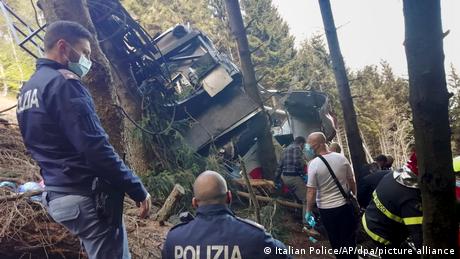 An Italian judge has ruled that three men detained over a cable car crash that killed 14 people in the north of the country should be released from jail.

Judge Donatella Banci Buonamici said there was a "total lack of evidence" against two of the suspects, who were allowed to walk free on Sunday.

However, she concluded that most of the blame fell on the third suspect — service technician Gabriele Tadini — who was allowed to leave prison under house arrest.

The trio were detained on Wednesday over the tragedy on May 23. The gondola connecting the Lake Maggiore town of Stresa to Mottarone mountain crashed to the ground after its pull cable snapped. Everyone on board was killed, with the exception of a 5-year-old boy who remains in hospital.

The northwestern region of Piedmont, where the accident happened, declared a day of mourning on Sunday.

Prosecutors have opened an investigation into suspected involuntary manslaughter and negligence. They allege the three men — cable car company owner Luigi Nerini, maintenance chief Enrico Perocchio, and Tadini — were aware that the lift had technical problems before the crash occurred.

Following the accident, Tadini admitted to investigators that he had deactivated the cable way's emergency brake system, which could have prevented the crash. He said he suspended the emergency system, with the agreement of the other two suspects, because it had been malfunctioning and interrupting the gondola service.

But according to the judge, Tadini tried to shift some of the blame on his two superiors after acting "with total disregard for human life, with bewildering carelessness."

Mottarone mountain is a popular tourist destination because of the spectacular views it offers of Lake Maggiore and the Alps.