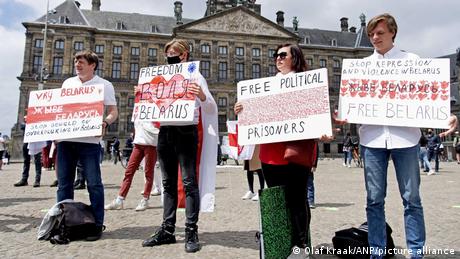 Belarussian opposition leader Sviatlana Tsikhanouskaya called for a demonstration of global solidarity with political prisoners in Belarus on Saturday, the one-year anniversary of her husband's arrest.

Tsikhanouskaya made the call from Lithuania where she has been living in exile since the outbreak of the large-scale protest movement against President Alexander Lukashenko following his widely rejected electoral victory last August.

Tsikhanouskaya took center stage in the opposition movement after her husband Sergei Tsikhanousky, who had planned to run against Lukashenko, was arrested last May.

What did Tsikhanouskaya say?

Tsikhanouskaya announced the "Global Picket of Solidarity with Belarus" with a video shared on social media.

She asked people to take part in events to raise awareness about the fate of repression of political prisoners in Belarus, specifically naming the anti-government blogger Raman Pratasevich who was detained along with his girlfriend Sofia Sapega almost a week ago after his flight from Greece to Lithuania was forced to land in Minsk.

Tsikhanouskaya said in her video that the arrest of her husband had "sparked the wave of peaceful protests and solidarity chains across the country."

"That is when the harshest repressions in the modern history of Belarus started," she added.

Why is the Belarussian opposition calling for protests?

According to official results, Lukashenko won last August's presidential elections, but these have been broadly condemned as rigged. The US and EU no longer recognize Lukashenko as the country's legitimate leader.

The popular pro-democracy protests against the government were harshly put down, but the arrest of Pratasevich has brought the world's attention back to the eastern European country.

The EU and US have said they will impose sanctions in the wake of the blogger's arrest. The incident has also once again increased tensions between the EU and Russia, who support Lukashenko's presidency.

Belarussian authorities also raided the offices of the country's largest online news portal Tut.by earlier in the month. The site was shut down and investigators opened legal cases against several reporters.

This article was written with support from DPA.