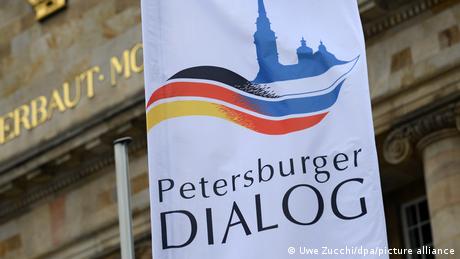 In 2001, Germany and Russia launched the annual Petersburg Dialogue format, a bilateral forum bringing together civil society groups, think tanks and decision-makers from the two countries. The aim was to maintain a dialogue with Russia via various channels. Now, however, on the 20th anniversary of the yearly gathering, Germany and Russia are at loggerheads over the ban of three German non-governmental groups (NGOs).

On Friday, the executive board of the Petersburg Dialogue said it had canceled a joint board meeting with the Russian side planned for July 8 and 9 in Moscow. The board said the main event, due to be held on October 14 and 15 in Kaliningrad, would take place only if all organizations could participate without being hindered in their work.

"The Petersburg Dialogue is supposed to build bridges between our countries," said the board's chairperson, Ronald Pofalla. "To ban its members from working in Russia and to threaten them with draconian punishment is something we will not accept. Obstruction and criminalization of non-governmental organizations has reached an intolerable level."

This week, the Russian prosecutor general designated the Center for Liberal Modernity (LibMod), the German-Russian Exchange (DRA) group and the Forum of Russian-Speaking Europeans "undesirable" organizations.

On Wednesday, German Foreign Minister Heiko Maas said banning "the work of organizations that strive for understanding between our two countries and peoples is a serious setback for our efforts to achieve better relations with Russia." He added that "nothing about their work can warrant or justify such a step." Calling on the Russian government to reverse its course, Mass said "representatives of civil society must be allowed to do their work without being criminalized."

"This was a slap in the face for us," the co-founder and director of LibMod, Ralf Fücks, told DW, adding that his group had been working in Russia for years. "Russian citizens are de facto banned from working with our organization, which means we have to end our cooperative projects," Fücks said, adding that this meant LibMod must completely reorganize its Russian operation.

Just recently, LibMod staged a virtual conference commemorating what would have been the 100th birthday of Soviet dissident and civil rights activist Andrei Sakharov. The organization defines itself as an "independent think tank, forum for the exchange of ideas, and project office." It was set up in 2017 by Fücks, a Green politician who formerly headed the Green-Party-affiliated Heinrich Böll Foundation, and his wife Marieluise Beck, a former Green lawmaker and expert on eastern Europe.

"We are not anti-Russian — on the contrary, we care about Russia's future; we want to see a democratic, European Russia," Fücks said.

Stefan Melle, who heads DRA, also spoke out about the move, calling it "draconian and unjustified." Melle added that the group was "appalled and disappointed."

DRA, founded in 1992, is one of the oldest German civil society organizations to operate in Russia today. It promotes student exchange programs and educational tours. DRA also runs a range of human rights, inclusivity, climate protection and environmental projects in former Soviet republics like Ukraine and Georgia. All this, Melle said, will now come to an end.

"We think we have done a lot to bring people from Germany and Russia, from the EU and Russia, together to share expertise, learn from each other and experience a form of European cooperation," Melle told DW.

Russia's Justice Ministry began blacklisting foreign civil society organizations in 2015. The three German NGOs in question have now been added to the list, which encompasses more than 30 civil society organizations altogether — most of them American. TheEuropean Platform of Election Observation (EPDE) was the first and, before now, only German NGO to make it on to the infamous list, mere days before Russia's presidential election in spring 2018.

"This law is very brutal and will have a devastating impact on our cooperation," Stefanie Schiffer, who was a member of the EPDE's board at the time, told DW. Since the ban, Schiffer, an expert on eastern European affairs, has been barred from entering Russia. She added that the Russian move had created a situation where Russian citizens are criminalized and can face prison time for cooperating with foreign NGOs. Such a situation, she said, was incompatible with a free Europe.

The Forum of Russian-Speaking Europeans, meanwhile, was founded in 2017 by a Berlin-based Russian exile. The organization describes itself as a network of actors "subscribing to liberal-democratic values, who oppose Putin's dictatorship, aggression and propaganda." The NGO stages anti-Kremlin protest events.

Why were the organizations banned?

Moscow's move does not come as a surprise. In April, the German ambassador was summoned to the State Duma in Moscow and informed about a new law designed to "protect" against "propaganda" spread by "anti-Russian forces." Russian lawmakers then lambasted four German NGOs, according to DRA's Stefan Melle, including the three that have now been blacklisted and the Heinrich Böll Foundation. The foundation has not, however, been banned.

Stefan Melle rejects these claims as "absurd." He thinks Russia objects to German organizations calling Crimea a part of Ukraine and mentioning the Hitler–Stalin Pact in discussions on World War II. "The Russian leadership wants neither of these facts to play a role in Russian self-identity and historiography today," Melle said.

LibMod director Fücks sees things in a similar way. In addition, however, he told DW his group was singled out for its LGBT activism and for pursuing a project aimed at promoting renewables in Russia. "Branding us like this aims to undermine international support for democratic civil society groups in Russia."

What now for the Petersburg Dialogue?

The blacklisting affects three representatives of the Petersburg Dialogue forum on the German side: Marieluise Beck is on the board, while Ralf Fücks and Stefan Melle are members.

Fücks said he awaited that the forum would be put on ice as a signal for as long as the Russian side continued to exclude part of it.

"This game of divide-and-rule in which some NGOS are declared to be undesirable partners and others compliant minions will not succeed," he said.

Stefanie Schiffer shares this opinion. "Things will not just go on as usual," she said, adding that the German side would discuss over the coming days what had to change

.Katrin Göring-Eckardt and Manuel Sarrazin of the Green Party have called in a press statement for the forum to be canceled this year in protest at Russia's actions. Several civil society representatives, such as the former president of the Bundestag, Norbert Lammert, have also appealed in an open letter for a suspension of the forum.