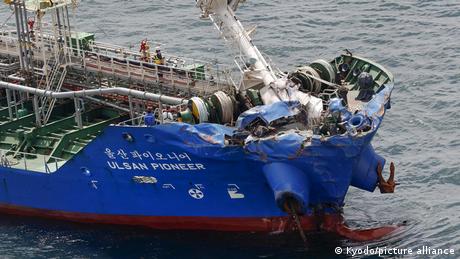 The Japanese coast guard is searching for three missing crew members after a cargo ship collided with a chemical tanker during the early hours of Friday.

Nine members of the freighter crew have already been rescued after their freighter sank at 2:40 a.m. (1740 GMT) in Kurishima Strait, Japan.

The incident occurred 4 kilometers (2.5 miles) north of the Imabari coast in the Japanese prefecture of Ehime.

It took just three hours for the Byakko to sink, leaving its 12 crew members in urgent need of rescue.

What were the consequences?

None of the 13 crew on the chemical tanker were injured in the accident.

The Ulsan Pioneer, which is registered in the Marshall Islands and owned by Heung-A Shipping, did not report any leakages of its acetic acid cargo it brought from a Chinese port.

The Byakko carried a cargo of car parts destined for the town of Kanda in Fukuoka prefecture when it sank.

On average, about 400 ships use the Kurushima Strait in southern Japan every day.