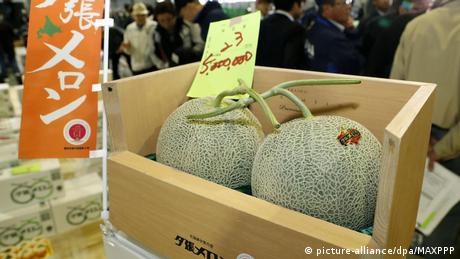 Perfectly round with a delicious green sheen, a pair of melons from the town of Yubari in northern Japan were sold for an eye-watering 2.7 million yen (€20,260) at the first fruit auction of the season at Sapporo wholesale market earlier this week.

Yubari is famous for the quality of its melons, which are known across the country as a delicacy and a symbol of the imminent arrival of summer.

The melons were purchased by Hokkaido Products Ltd., a local baby food manufacturer, which announced that they would be quickly frozen, divided into 10 equal segments and sent to customers taking part in a lottery.

The president of the company told local media that he wanted to "cheer people up" during the ongoing hardships brought on by the coronavirus pandemic.

The price the company paid for the two melons was significantly higher than the maximum of €900 that last year's prime specimens went for, with lavish spending during the pandemic and economic crisis frowned upon by many.

A premium on gift-giving

And that bodes well for farmers growing other fruit that will soon be coming to market in a nation that places a premium on presenting close friends or business partners with gifts that are clearly extremely expensive as a mark of deep respect.

"When I was a young girl, I remember my father being visited at different times of the year by businessmen and officials of the city where we lived, and they would always bring a gift," said Maya Hamada, a professor of literature at Kobe University.

"Sometimes it would be a bottle of very nice whisky, but I always thought it was best when they brought us fruit," said Hamada, whose father was a senior executive in a pharmaceuticals company.

"They brought us cherries when the first ones had ripened, while others came with boxes of apples or a melon that had been carefully wrapped and placed in a box," she recalled. "But my favorite was always the juicy peaches that are a specialty of Okayama prefecture. They were wonderful."

Gift-giving is an important ritual in Japanese culture. Any time someone visits another person's home, even if that person is family, they traditionally come bearing a present, usually something that is edible. A similar pattern is followed in the world of business, where executives attend meetings bearing gifts.

"It is very important that the gift is expensive, and obviously so," pointed out Hamada. "The person who is giving the gift is communicating that he values the relationship very highly and therefore is happy to pay a lot of money to continue that friendship."

The giving of a gift also implies obligation in business circles, she said, with the recipient now perceived to be in debt to the person that gave him the gift — a form of leverage that might be exploited in the future when a new deal needs to be agreed on or arranged.

Kevin Short, a professor who specializes in environmental education at the Tokyo University of Information Sciences, said the tradition in Japan of exchanging gifts dates back to the early years of the Edo Period, between 1600 and 1868. He says gift-giving has become an ingrained part of the culture. And while fruit is a common gift now, it was another sought-after commodity back then.

"Initially people gave presents of fish that were caught at different seasons of the year," he said. Skipjack, for example, are considered at their best when the fish migrate south off Japan's east coast in the autumn months.

"People in Japan still express their appreciation for the different seasons through the food that they eat and there is also a degree of competition among people to be seen to be paying the largest amount for the first fish of the season or a particularly good specimen," Short said, adding that the concept was later adopted for high-end fruit.

"There is a lot of prestige attached to giving gifts in Japanese society," he said. "It's a sign of respect and serves to reinforce the notion that a favor must one day be returned."

Every region of Japan has its specialty fruit and vegetable, with consumers more than willing to pay a premium. A bottom-of-the-range square watermelon from Kagawa Prefecture will typically go for €122, a single mango of the "Taiyo no Tamago" (Egg of the Sun) brand, grown in Miyazaki Prefecture, typically go for well over €80 each and a premium boxed pair can be found on display in high-end department stores for over €2,400.