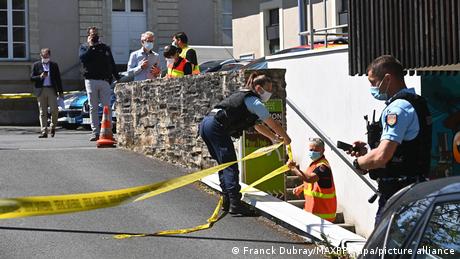 A man was killed in a shoot-out with French police on Friday after he attacked and badly wounded a police officer with a knife in the western town of La Chapelle-sur-Erdre, officials and local media reported.

The French Interior Minister Gerald Darmanin tweeted that "the Gendarmes have neutralized the individual suspected of carrying out the knife attack on the municipal police officers in la Chapelle-sur-Erdre. Thank you and my thoughts for the officers injured during the arrest."

The attacker was severely wounded after he began to exchange gunfire with the police and died shortly afterwards.

Police had told local residents to stay away from the area of the attack after the man reportedly stole the officer's gun before fleeing the scene.

What happened during the attack?

The attacker attempted to flee in a car, but a crash forced him to get out and escape on foot, Reuters reported.

Helicopters, search dogs and more than 200 police officers were involved in the search, according to the Associated Press.

A police source also told Reuters that local schools had been put under police protection.

A spate of violent attacks against police officers in France led the French government to pledge stricter sentences for anyone found guilty of attacking police.

A police officer was killed during an investigation into a drug-dealing site in the southern city of Avignon earlier in the month while another police employee was stabbed to death in a suspected extremist attack just outside of Paris in late April.