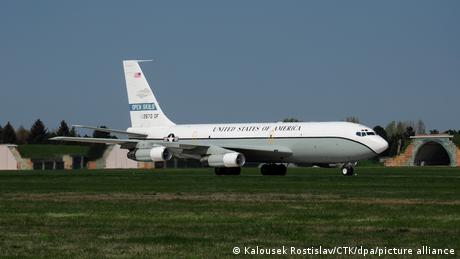 Russia on Friday said it was "disappointed" with the US decision not to reenter the "Open Skies Treaty," which allows inspection flights over member countries' territories to monitor military activities.

The United States State Department on Thursday said it had informed Russia of the decision following a review of Moscow's compliance with the pact.

"In concluding its review of the treaty, the United States [...] does not intend to seek to rejoin it, given Russia's failure to take any actions to return to compliance," a State Department statement said.

The US officially pulled out of the treaty in November 2020 during the last months of former President Donald Trump's term in office. Moscow had hoped that President Joe Biden's administration would reverse the decision.

Sergei Ryabkov, Russia's deputy foreign minister, was quoted Friday by the RIA news agency saying the move "certainly does not make us happy."

"The US has missed another chance ... to make a positive contribution to the task of strengthening security in Europe," RIA quoted Ryabkov as saying on Friday.

According to Russian News agency TASS, Ryabkov dubbed Washington's decision a "political mistake" and one that has dealt "a new blow on the European security system."

Why did the US drop Open Skies?

Last year, US officials claimed that Russia violated the Open Skies Treaty by blocking surveillance flights around certain areas, including the Russian enclave of Kaliningrad and along the border with Georgia. Moscow has insisted those restrictions were permissible under the treaty.

After the US announced its withdrawal, Russia followed suit.

Last week, lawmakers in Moscow voted to withdraw from the treaty. However, Russian officials had said they were willing to reconsider the move if the US did the same.

The European Union and Germany have also criticized the US withdrawal.

In May 2020, German Foreign Minister Heiko Maas called the treaty an "important element of Europe’s arms control architecture" that contributes to "peace and security."

"We understand that there have indeed been difficulties with respect to implementation on Russia's part. However, from our point of view that does not justify withdrawing from the Treaty," Maas said.

Even US President Joe Biden, as a presidential candidate in May 2020, said former President Trump's decision to drop the treaty was "doubling down on his short-sighted policy of going it alone and abandoning American leadership."

However, Biden appears to have reevaluated his position.

"Russia's behavior, including its recent actions with respect to Ukraine, is not that of a partner committed to confidence-building," said Thursday's State Department statement.

US and Russian withdrawal from Open Skies leaves only one major arms control treaty in place between the nuclear powers, the New START treaty.

The fresh tension comes ahead of a meeting between President Biden and Russian President Vladimir Putin planned for June 16 in Geneva, Switzerland.