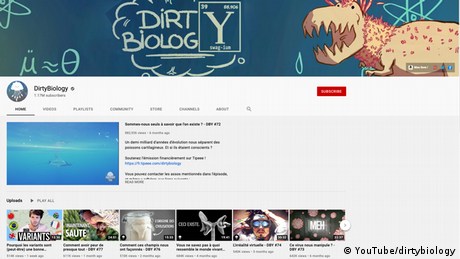 "C'est étrange" (This is strange) — that's how YouTuber Leo Grasset started his Twitter message on May 24. Grasset runs the popular science channel Dirty Biology and in his tweet, he recounted how he was contacted by a PR agency called "Fazze" which offered him a considerable amount of money to falsely discredit the BioNTech/Pfizer COVID-19 vaccine.

According to Grasset, there were preconditions: He had to phrase it in a way to make clear that he was expressing his own opinion, not acting at the behest of the PR agency. "Say that you're interested in the different vaccines and that you had discovered some information which the mainstream media were deliberately not reporting on," Fazze requested.

In an interview with French public broadcaster France 5, Grasset said he was aware that surreptitious advertising is illegal in France. But his main concern was to avoid the spread of false information. The agency had asked him to say that there was a high fatality risk in connection with the BioNTech/Pfizer vaccine. As "proof" he was given a list of undocumented origin purportedly showing that the death rate among people who had received the BionTech jab was significantly higher than for those who had AstraZeneca or Johnson&Johnson.

Grasset was one of several influencers who were approached by Fazze across France and Germany.

Mirko Drotschmann, who runs a German-language science channel on YouTube under the name of Mr. Wissen2Go and has 1.5 million followers, says he was approached in the same way.

"I was surprised and taken aback, at the idea that the people in this agency would assume that I'd go for this kind of deal," Drotschmann told DW. "They obviously didn't know me at all," he said still amazed at the company's "very crude" tactics.

The BioNtech/Pfizer vaccine is being used extensively across Europe, and in early May the EU ordered an additional 1.8 billion doses. Since then there has been an increasing number of reports attempting to discredit the vaccine, many of which can be traced back to Moscow or Beijing. The EU warned in April that there was a rising number of spurious reports falsely claiming that European and US vaccines were linked to a number of deaths across Europe while praising the safety and superiority of Russian and Chinese vaccines.

Fazze: Who is behind the mysterious PR agency?

The PR agency Fazze has come under scrutiny from French media, which found that the company's London address was fake. French daily Le Monde, Numerama online news, and others found that Fazze is not registered in the UK at all, and traces appear to lead to a mailbox in the Virgin Islands.

Le Monde was able to trace back the email communication with the French influencers and found they had been sent from the account of a supposed Head of Sales, who was based in Moscow, not London.

Meanwhile, the fazze.com website has been taken offline, all accounts of employees are no longer accessible, and all links posted on Reddit straight after Grasset's revelations have been deleted.

In its communication with the science bloggers, Fazze never mentioned the Russian vaccine Sputnik V. But political scientist and Russia expert Janis Kluge, with the German Institute for International and Security Affairs (SWP), believes that links to Russia are plausible.

On Twitter Sputnik V has recently published the same disinformation claiming a high number of deaths were in connection with mRNA vaccines.

"Russian business interests are the motivation for these fake news campaigns," said Kluge. "It is about improving Russia's image as a world power with high-tech expertise. And throwing dirt on competitors is part of the game," he said.

It is unknown how many science bloggers may have accepted the offer from the PR agency Fazze. But Grasset says he hopes those who did accept had no time to spread the fake news before the scam was made public.