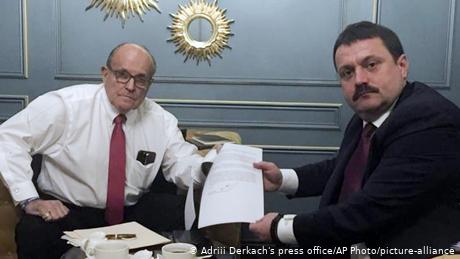 The legal probe is examining whether the Kyiv officials, both past and present, used Rudy Giuliani, who was lawyer to former President Donald Trump at the time, to meddle in the 2020 election, the US paper said.

Investigators are looking into whether the officials used Giuliani to spread misleading claims intending to undermine Trump's political foe and current US President Joe Biden.

The inquiry is being handled by federal prosecutors in New York, the newspaper said, and is separate from an ongoing probe into Giuliani's dealings in Ukraine.

Lawmaker in the spotlight

The newspaper named Andrii Derkach, a Ukrainian lawmaker, as one of the officials being investigated.

The Treasury Department previously sanctioned Derkach, identifying him as an "active Russian agent for over a decade."

Giuliani's lawyer, Robert Costello, told the New York Times that his client's interaction with Derkach was merely part of his investigation into claims of corruption on the part of Joe Biden's son, Hunter.

"When you investigate allegations of corruption, you talk to all sorts of people; some are credible, and some are not," the US paper quoted Costello as saying.

But the New York Times emphasized that Giuliani has not been accused of wrongdoing in this investigation.

The separate FBI investigation into Giuliani's dealings in Ukraine — which is looking into a possible case of unregistered lobbying for Ukrainian officials, a violation of federal law — moved forward last month when FBI agents searched Guiliani's home and office.

The New York Times questioned why the two cases looking into Giuliani's affairs in Ukraine had not been rolled into one. It pointed out that some cases were moved to different FBI offices due to clashes between the FBI and Trump's justice department.

The former New York mayor has previously denied representing any Ukrainians and suggested any such allegations are politically motivated.

This article was written in part with material from Reuters news agency.