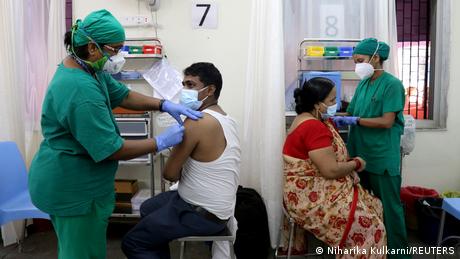 For journalists covering the coronavirus health crisis in India, the past year has been a horrific time, with over 230 of them succumbing to the disease, which they contracted while documenting what's happening across the country.

During the ongoing devastating second wave of the virus, on average three journalists died every day due to COVID in April. That figure climbed to four per day in May.

The second wave has claimed the lives of several senior journalists and local reporters working in districts, towns and villages across different Indian states.

A recent report by the Delhi-based Institute of Perception Studies revealed that during India's first wave of the pandemic between April and December 2020, 56 journalists died of COVID-19.

In comparison, during India's second wave of pandemic between April 1 and May 16 this year, 171 journalists died of COVID-19. The remaining journalists died between January and April, according to the report.

The institute has included all those journalists who died after getting infected while covering news in the field or working in offices. These range from reporters at media organizations, stringers, freelancers, photojournalists and journalists.

The states of Uttar Pradesh, Maharashtra, Delhi and Telangana account for most of the deaths.

Journalists are particularly at risk of contracting the virus as many are required to visit hospitals, crematoriums and other high-risk locations to highlight the problems faced by the public during the pandemic.

Despite the heightened risk and rising toll, journalists haven't been designated as frontline workers in most states. This has meant that they were not given priority in the vaccination program in those places.

Even the government in the capital Delhi has been reluctant to make such a decision.

"We have been asking the Delhi government to make this announcement of declaring the media personnel as frontline workers but there has been stoic silence," Shahid Abbas, vice-president of the Press Club of India (PCI), told DW.

Several media organizations and associations have appealed to the federal government to declare journalists as frontline workers nationwide.

"The reporters who are out there on the ground reporting about the pandemic should definitely have been given the vaccine a long time ago. When the country was vaccinating senior citizens, journalists too should have been included," Abhinandan Sekhri, co-founder of the media outlet Newslaundry, told DW.

Reports suggest that several journalists have died because because they did not receive timely medical help.

Vinay Srivastava, a journalist in the northern city of Lucknow, contracted COVID-19 in April. Even though he reached out for oxygen support through his social media handles, he could not receive hospital admission.

Similarly, Rohitash Gupta, 36 from a Bareilly town, died at home after being unable to secure a hospital bed.

"News media is included in essential services. Therefore, it will only be fair that journalists be given this cover of protection, especially in the face of the number of infected rising to astronomical levels," Sanjay Kapoor, general secretary of the Editors Guild of India, told DW.

The Guild has appealed to the federal government to make journalists eligible for vaccinations nationwide.

"We still hope that the government will respond and take immediate measures to ensure that journalists are protected on the job," said Kapoor.

Even in states that have declared journalists as frontline workers like Punjab, Madhya Pradesh and Bihar, priority vaccination is only offered to those who have received accreditation from their respective state governments.

This constitutes only a small number of journalists and excludes freelancers and stringers, who are often the ones covering news on the ground and sending it to media outlets.

"It is high time the authorities paid attention to the complete lack of access to timely medical attention for journalists on duty and draw up a vaccination plan for them on par with healthcare workers and other recognized frontline workers," Preeti Kapoor of the Network of Women in Media India (NWMI) told DW.

The NWMI also pointed out that most journalists, especially in rural areas, did not have access to protective gear and had to work in constant fear of wage cuts and job losses.

When contacted, the government refused to comment on the issue. "It is still being studied," a government official told DW.

Last week, the Geneva-based NGO Press Emblem Campaign (PEC), said India was among the top three countries in the world with the highest number of COVID-related journalist fatalities.

It said India had overtaken Brazil, which recorded 194 deaths, followed by Peru and Mexico.

At least 1,330 journalists have died in 76 countries from coronavirus since March 2020.