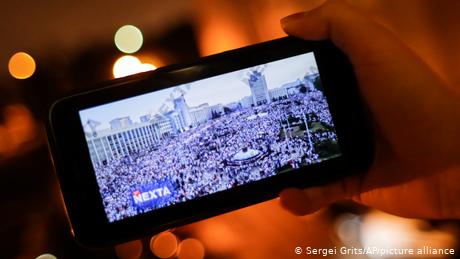 Raman Pratasevich has been an opposition activist in Belarus since he was 16. But it was one move that likely turned the 26-year-old into such a threat that the authoritarian regime diverted his Lithuania-bound flight under false pretenses, forced it to land in Belarus and arrested him on Sunday.

What really put him in the spotlight was his role as editor-in-chief of the Telegram channels Nexta (pronounced NEKH-ta, and Belarusian for "someone") and Nexta Live.

Together, these channels on the encrypted messaging app Telegram have accumulated millions of subscribers. They were the main source for people to exchange information, photos and videos surrounding the mass opposition protests after Alexander Lukashenko once again declared himself the winner of presidential elections last August.

"People understood that information could be sent to us safely," Pratasevich told DW before the election.

Pratasevich first ran the channels from Poland before he switched gears in September 2020 and pursued other forms of activism from Lithuania, including working for another Belarusian opposition Telegram channel. Back in his home country of Belarus, there are several cases pending against him, which could amount to 15 years in prison. The secret service KGB has put him on a terror list.

After his arrest, Belarusian state TV broadcast a video on Monday, in which Pratasevich is seen with dark marks on his forehead. In the video he says he is in good health in the detention center, but the opposition and his family are sure the video was filmed under duress.

"I continue cooperating with investigators and am confessing to having organized mass unrest in the city of Minsk," he said in the recording.

A common goal to 'free Belarus'

Nexta founder Stepan Putilo first started the project as a YouTube channel, and turned to Telegram in 2018. Thousands of users sent in information on Belarusian politics, which his team curated. But the incoming messages exploded when opposition protests began after the presidential elections in August 2020.

Putilo says the channels did play somewhat of a role in coordinating the peaceful demonstrations since they were such a vital source of information for protesters.

"But all the reports about where people should go came from the people themselves," he told DW in December. "We only checked them, chose the best ones and advised with administrators."

Critics question if Nexta has done enough to verify its users' reports. In the early stages of the protests, the channel shared the preliminary information that a protester had died in a brutal police beating, for example. He later confirmed he had survived.

The channels garnered importance for their role in sharing information about and documenting the police crackdown, which went underreported by state media.

Other key elements that contributed to the success of Nexta were that the Telegram app is encrypted, which means the channels can't be censored. Additionally, the Telegram app often continued working during internet blackouts.

Putilo and Pratasevich quickly became foes of the authoritarian government. "For the regime, everyone who goes against it and shows the truth is an enemy, extremist and criminal," said Putilo who lives in Poland and is facing several pending charges in Belarus. "The regime doesn’t show strength but weakness with that. Because it is admitting that young people in their early twenties can threaten the existence of the regime after 26 years of dictatorship."

"In reality, what unites the people behind this channel is the common goal to turn Belarus into a free, democratic, normal country," he added.