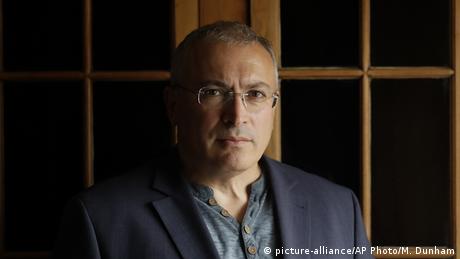 Opposition group Open Russia announced Thursday it would shut down after coming under increasing pressure from Russian authorities.

The Russian government has stepped up its campaign against critical voices in recent months as the country prepares for parliamentary elections in September.

The Kremlin has listed dozens of organizations — including Open Russia — as "undesirable" as part of a broader crackdown on political dissent.

A law passed in 2015 made belonging to such organizations a criminal offense. An amendment to that legislation, currently progressing through parliament, would punish membership with jail time.

He tweeted that it was "awfully sad" to have to shut down, but added that he would keep pushing for political change in "a personal capacity."

Earlier this week, Moscow branded three German NGOs as "undesirable, effectively banning them from operating. That prompted strong criticism from the European Union and the German government.

Stefan Melle, head of German-Russian Exchange, which is one of the German groups affected by the move, told DW that Russia is "unfortunately being closed off" by its leaders.

"That makes us very concerned, not only for our colleagues and partners on the ground, but really also for the people in Russia as a whole," he added.

"We think this is part of a larger escalation process and that will unfortunately continue — at least until the Duma elections in September 2021."

What is Open Russia?

The Kremlin critic moved to London after spending a decade in a Russian prison on controversial fraud charges.

The group has been active in Russia for more than 20 years. Its director, Pivovarov, was heavily involved in a campaign against President Vladimir Putin's controversial changes to the constitution that will allow him to stay in power until 2036.

In March, police arrested around 200 opposition politicians and municipal deputies, including Pivovarov, at a conference organized by Open Russia in Moscow.

Authorities in Russia have pointed to alleged Western interference and threats to constitutional order to justify laws targeting opposition groups and foreign-funded organizations.

Kremlin spokesman Dmitry Peskov said the closure of Open Russia was no indication that authorities were upping pressuring opponents.

Russia's most prominent opposition figure Alexei Navalny is currently serving a prison sentence on old fraud charges that he says are politically motivated. He was arrested earlier this year after returning from Germany where he had been receiving treatment for a nerve agent poisoning he blamed on the Kremlin. Russian officials deny the charges.