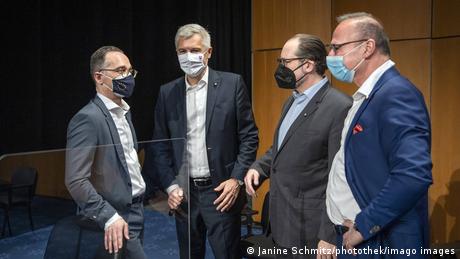 European Union foreign ministers are discussing a new round of economic and sector-specific sanctions for Belarus, during informal talks on Thursday in the Portuguese city of Lisbon.

This comes just days after EU leaders agreed to impose serious aviation restrictions, in response to a forced landing of a passenger plane by Belarus authorities.

EU foreign policy chief Josep Borrell decried "the hijacking of the plane and the detention of the two passengers" as "completely unacceptable" shortly ahead of the meeting.

He tweeted he was looking forward to discussions.

Borrell said that the EU foreign ministers would be discussing sanctions against specific people connected to the Belarusian regime.

German Foreign Minister Heiko Maas said that he expected to see significant sanctions. If Belarusian President Alexander Lukashenko does not make concessions, "one must assume that this will be just the beginning of a large and long spiral of sanctions," Maas said ahead of the meeting.

He described Lukashenko's behavior as "so unacceptable" that the EU would not be satisfied with smaller sanctions steps.

Instead, the goal is "that we want to impose sanctions on the economic structure and on financial transactions in Belarus quite significantly so that it also has an impact."

As they headed into the meeting, Baltic state ministers from Estonia and Lithuania speculated about possible sectors that the EU could target with sanctions.

Meanwhile, Estonian Foreign Minister Eva-Maria Liimets told reporters that she was hoping to discuss sanctions on "the companies which are close to the Belarusian regime."

DW's Senior European Correspondent Bernd Riegert explained that despite the far-reaching sanctions on flights, these were "not the biggest measures" that the EU will take against Belarus.

He said that the "sectoral sanctions" being discussed on Thursday could "really hurt Belarus." He suggested the EU could target the country's wood or cement industry.

Yet he stressed that "the EU is not there yet," adding that "not all foreign ministers are sure this is the right path."

What's the row with Belarus?

On Sunday, authorities in Belarus forced a Ryanair plane to land in the capital, Minsk, citing a bomb threat.

They scrambled a fighter jet to ensure that the passenger plane, which was flying from Athens in Greece to Vilnius in Lithuania, would land.

Authorities arrested 26-year-old Raman Pratasevich, an exiled Belarusian dissident and blogger in Belarus, who was onboard. He had left the country in 2019, shortly before pro-democracy protests swept the country, which has been dubbed "Europe's last dictatorship."

The EU said it "strongly condemns" the arrest and forced landing, adding that it endangered aviation safety.

They requested EU carriers to refrain from flying over Belarusian airspace.

What else is on the agenda?

The EU's foreign ministers are also set to discuss its strategy in Africa. This comes days after Mali's interim president and prime minister resigned on Wednesday after being arrested in an "attempted coup."

Several EU countries have troops in the country as part of efforts to shore up a deteriorating security situation in the Sahel region.

They will also talk about what the EU council termed "unresolved conflicts in the Eastern neighborhood" — likely also to mean Ukraine, in addition to Belarus.

In April, concern grew in Western Europe over the amassing of around 100,000 Russian troops along its border with Ukraine and in the Crimea, which Russia annexed in 2014.

Ministers are also set to tackle tensions in the Indo-Pacific region. There has been increasing tension in the contested South China sea region between the US and China.