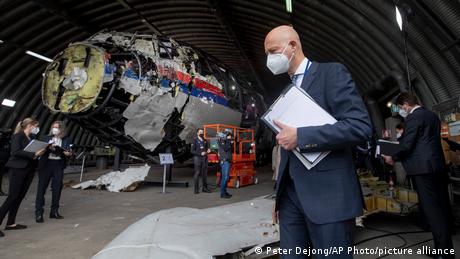 Dutch judges presiding over the trial in abenstia of four suspects, three Russians and one Ukrainian, for the downing of Malaysian Airlines flight MH17, were permitted to view the wreckage for the first time Wednesday.

The judges viewed the reconstructed front of the plane at the Glize-Rijen air base in the Netherlands. Flight MH17 was en route from Amsterdam to Kuala Lumpur on July 17, 2014 when it was struck on the left side of the aircraft by a BUK missile fired by Russian-backed forces in eastern Ukraine.

All 298 people on board, 196 of whom were Dutch nationals were killed in the crash. The Netherlands holds Russia responsible for the downing the airliner while Russia denies all involvement.

An emotional visit for judges and victims' families alike

Presiding judge Hendrik Steenhuis said, "We realize that this visit to the reconstruction of MH17 as part of the official criminal process will be very emotionally loaded for relatives."

He added, "This is a reconstruction of an aircraft in which their loved ones were underway to a destination that they never reached because the aircraft crashed during the flight and all on board perished."

After the judges surveyed the wreckage, prosecutors and defense attorneys who had previously viewed the destroyed aircraft were permitted a viewing as well. Victims' families could watch via livestream.

Arlette Schijns, a lawyer for the victims' families, noted, "We cannot get closer to the death of the 298 victims than this."

Schijns said of the visit, "Anybody who sees that can imagine that the immaterial suffering caused by this is immense."

Who is on trial for the downing of flight MH17?

Three Russians nationals, Oleg Pulatov, Igor Girkin and Sergei Dubinsky, and one Ukrainian citizen, Leonid Kharchenko, are being tried in absentia for the crime of downing MH17 with a BUK missile. All four men are alleged to be lead figures in the Russian-backed forces occupying parts of Eastern Ukraine.

International investigations have shown the missile that downed MH17 originally traveled to eastern Ukraine from the Russian city of Kursk and belonged to the 53rd Anti-Aircraft Missile Brigade of the Russian Army.

Of the four suspects, only Pulatov has defense counsel present. He has insisted through his counsel that he was not involved in the downing of flight MH17.

According to Dutch law, defendants are not required to enter a plea.