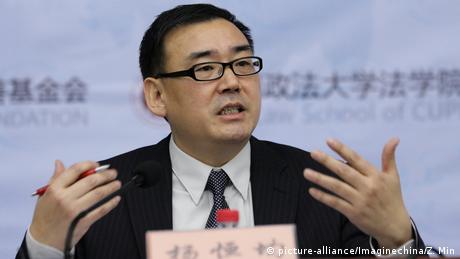 Australian Ambassador to China Graham Fletcher was denied entry after he entered the south gate of Beijing No. 2 Intermediate People's Court. Outside the court, police lined the block.

"This is deeply regrettable and concerning and unsatisfactory," Ambassador Fletcher told reporters who were also denied access to the court. "We've had longstanding concerns about this case including lack of transparency and therefore have concluded that it's an arbitrary detention."

According to consular protocol, representatives from both China and Australia should be permitted to enter court when citizens of either nation face trial in the other country.

Prior to his detention in January 2019 at Guangzhou airport in southern China, Yang was a high-profile blogger living in New York who had also authored a series of spy novels. He was traveling with his wife Yuan Xiaoliang at the time.

Despite applying for permission to attend the court hearing, she too was denied access. The two have not seen each other since he was taken into custody by Chinese authorities.

Online, Yang wrote about U.S. and Chinese politics. He was previously arrested by Chinese authorities in 2011 and held for three days during China's brief "Jasmine Revolution" protests.

Following his release in 2011, Yang said he had once worked for the Chinese state security agency in Hong Kong and Washington prior to moving to Australia in 1999.

What charges does Yang Hengjun face?

Chinese authorities arrested Yang in 2019 at a time when they were in the middle of a crackdown. The Chinese government feared foreign interference in the country's internal affairs and sought to stamp out what they claimed was a "color revolution" in the country.

The charges against Yang remain shrouded in secrecy. The Australian government previously said they have not received "any explanation or evidence for the charges," prompting an angry response from China's Embassy in Canberra Saturday.

Australia's Foreign Minister Marise Payne said on Thursday that Yang's messages to his family in Australia were "deeply moving". She told ABC radio that Australia desired a "transparent and open process," which the Australian government believed Yang was not being afforded.

"We are not interfering in China's legal system. The concerns we have raised are legitimate ones," Payne said.

Human rights lawyers Mo Shaoping and Shang Baojun will represent Yang in court Thursday, although the Australian government has said Yang's access to his legal team has been minimal.

A verdict in the case could come as soon as Thursday. Yang has said he has "no fear" in his most recent messages to family and friends in Australia.

Feng Chongyi, a family friend, told the Associated Press: "Given Beijing's determination to punish him and the current bad relations between Australia and China, I am deeply concerned that Yang's sentence will be harsh."

Beijing is furious over the Australian government's calls for an international investigation into the origins of COVID-19 as well as the decision to ban Chinese telecom giant Huawei from the country's 5G network.

China has retaliated by banning the import of a variety of Australian goods including barley, beef, coal, lobsters, wine, and wood — but not iron ore, which remains very much in demand among Chinese steel manufacturers.