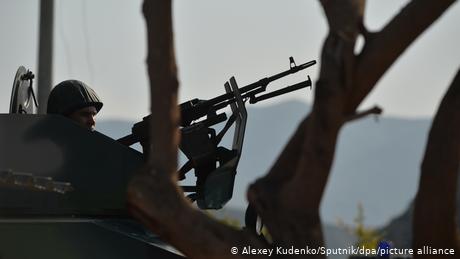 Azerbaijan's Defense Ministry said on Thursday that six Armenian servicemen were detained as they attempted to cross the border.

According to the Azeri army, an "intelligence-sabotage group" of Armenian soldiers tried to cross to the other side at around 3 a.m. local time (0700 UTC).

Armenia's Defense Ministry confirmed the arrests but said that Azerbaijan captured the soldiers "while [they were] carrying out engineering works in bordering area of ​Gegharkunik region of Armenia."

In November, Armenia and Azerbaijan signed a Russian-brokered deal to end the military conflict over the disputed region of Nagorno-Karabakh.

But tensions have been rising again since both countries last month accused the other of opening fire in Karabakh and their shared border.

What are the recent tensions?

Armenia had accused Azerbaijan of firing at Armenian positions earlier this week. Azerbaijan denied the accusation.

An Armenian soldier was killed in a border shootout with Azerbaijani forces on Tuesday, according to Armenia's Defense Ministry.

Earlier this month, Armenia also accused the Azeri military of crossing its southern border in an "infiltration" to "lay siege" to a lake shared by the two countries.

The United States and France have called on Azerbaijan to withdraw its forces from Armenian territories.

What was the Armenia-Azerbaijan war about?

The war over a breakaway Armenian enclave in Azerbaijan erupted in late September, with some 6,000 people killed in six weeks of fighting.

Azerbaijan retook much of the land in and around Nagorno-Karabakh, which it lost in a 1991-94 war that killed and displaced tens of thousands of people.