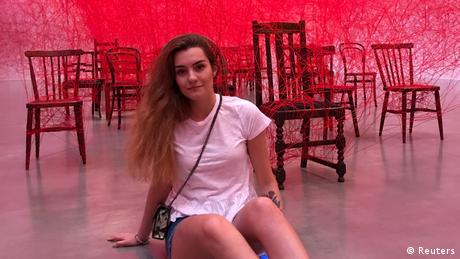 After a two-week vacation in Greece, 23-year-old Sofia Sapega was returning to her university studies in the Lithuanian capital, Vilnius, on Sunday. But plans to defend her master's thesis were put on hold after Belarus falsely claimed there was a bomb on her Ryanair flight, forced the plane to land in Minsk and took her into custody.

She was traveling with her boyfriend, Raman Pratasevich, a Belarusian blogger and prominent critic of authoritarian leader Alexander Lukashenko. As soon as the plane was diverted to Minsk, Pratasevich realized he would be arrested and handed Sapega his laptop and phone, a passenger on the flight told Reuters news agency. But Belarusian authorities detained her, saying she will be held in pre-trial detention for two months.

Sapega’s mother, Anna Dudich, told DW she visited the pre-trial detention center on Wednesday, but was only allowed to bring food and personal hygiene items to be passed on to her daughter.

"I want my daughter to be free and return to her old life," she said. "But of course, since Sunday there is no 'old life.' We all are going through a new stage in our lives. A scary stage."

On Tuesday, Sapega appeared in a video, saying she was a publisher of a Telegram channel that illegally disclosed the private information of officers in the Belarusian Interior Ministry.

Sapega is well and has not complained of inappropriate treatment, the RIA news agency reported, citing the Russian Embassy to Belarus.

But the Belarusian opposition members said the recording, which shows Sapega talking fast and making little eye contact with the camera, was coerced and possibly made under duress. They also said Pratasevich’s alleged confessional video, in which he has dark marks on his forehead, was forced.

"Clearly, Raman is beaten in prison," exiled opposition leader Sviatlana Tsikhanouskaya tweeted. "He and Sofia are under psychological pressure."

Sapega's mother, Anna Dudich, said there was no reason for her daughter's arrest. Dudich has been watching the video of her daughter over and over to find possible traces of torture.

"Sofia did not actively express her position on Belarus and the protests. In general, our family is out of politics," she told DW. "We are small little people, in general, nothing depends on us in life."

"My hopes are now probably based on a miracle and on the knowledge that my daughter is definitely not guilty of anything," she told Reuters from Lida in Belarus. "She simply showed up in the wrong place at the wrong time."

The last time Dudich heard from her daughter was in the form of a text when the plane was forced to land in Minsk, she told Reuters.

It only read "Mama."

The arrest of Pratasevich and Sapega caused international outrage. EU leaders have called the plane diversion a "hijacking" and "state piracy" and are demanding the immediate release of the detained couple.

On Monday, they announced additional economic sanctions on individuals involved in the flight diversion as well as businesses supporting Lukashenko’s regime. The EU has progressively been restricting key political figures in Belarus since October 2020 as a response to the government crackdown on peaceful protesters.

This time around, the 27-nation bloc also prohibited Belarusian airlines from flying in EU airspace or landing at EU airports. Some European carriers like Lufthansa and KLM have stopped flying to Belarus.

"Lukashenko and his regime have to understand this will have severe consequences," European Commission President Ursula von der Leyen said.