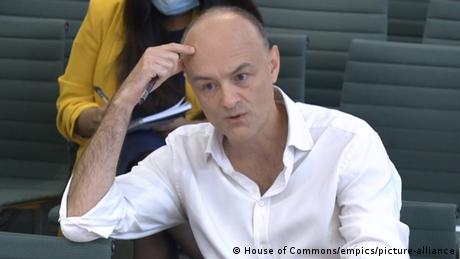 The United Kingdom government failed in its duties toward the British public in its response to the coronavirus crisis, a former chief adviser to British Prime Minister Boris Johnson told lawmakers on Wednesday in a televised hearing.

What else did Cummings say?

"When the public needed us most, the government failed," Cummings said before members of parliamentary committees probing the government's response to the pandemic.

"I think it's obvious that the Western world, including Britain, just completely failed to see the smoke until the alarm bells in January; there's no doubt about it," he added.

Cummings went on to say that British officials had failed to learn from experiences with COVID in Asia and claimed they had resisted new ideas from young scientists.

He also described the British government as being overly secretive and bureaucratic and said that domestic media had not subjected its policies to any real independent scrutiny.

And he slammed the government for its lack of preparation.

"Number 10 was not operating on a war footing in February on [COVID] in any way, shape or form. Lots of key people were literally skiing in the middle of February," he said, using a nickname for the prime minister's office at Number 10 Downing Street.

"It wasn't until the last week of February that there was really any sort of sense of urgency I would say [...] in terms of Number 10 and Cabinet," he added.

Johnson's spokesman on Tuesday denied such criticism, saying that "At all times we have been guided by the data and the latest evidence we had."

As had been expected by many analysts, Cummings was unsparing in his criticism of the prime minister.

He accused Johnson of downplaying the dangers of the illness.

"The basic thought was that in February the prime minister regarded this as just a scare story [...] he described it as the new swine flu," Cummings said.

He told lawmakers that Johnson had even considered being injected with the coronavirus live on television.

Johnson did in fact later fall seriously ill with the disease in late March 2020 and had to be treated in an intensive care unit.

How has Johnson responded?

In answer to a question from opposition Labour leader Keir Starmer, Johnson said he did not accept major allegations made by Cummings.

"I don't think anybody could credibly accuse this government of being complacent about the threat that this virus posed at any point. We have worked flat-out to minimize loss of life," the prime minister said.

"The handling of this pandemic has been one of the most difficult things this country's had to do for a very long time, but none of the decisions have been easy."

What is the hearing for?

The hearing was part of a parliamentary inquiry into the UK's pandemic management conducted by two committees of senior members of parliament: the science and the health committees.

An independent public inquiry into how the government handled the pandemic is to begin in spring 2022.

How has the pandemic been managed in the UK?

Critics have said Johnson's government was tardy in imposing lockdowns in early 2020 to prevent the spread of the coronavirus and that scientific advice was often not heeded.

On the plus side, the country has seen a successful vaccination drive, with around two-thirds of adults having received at least one dose so far.

This makes the UK vaccination program one of the fastest in the world — along with the UAE, Israel, Bahrain and Chile.

Who is Dominic Cummings?

Cummings, 49, was a major strategist in the "Leave" camp during the 2016 Brexit referendum campaign.

When Johnson was appointed prime minister after Theresa May's resignation in July 2019, he chose Cummings as his chief adviser.

Cummings is seen as having helped engineer Johnson's landslide victory in elections in December of that year.

However, there were persistent tensions between Cummings and his colleagues, and he left the job a year after the elections.

Cummings was also criticized for undermining the government's coronavirus lockdown message in the early days of the pandemic.

He undertook a long cross-country car journey with his family and visited a local landmark, later claiming that the latter trip was to test his eyesight. Johnson continued to support him at the time, but many critics found his defense unconvincing.

Last month, Cummings emerged from a long period of relative silence to accuse Johnson of seeking to use potentially illegal donations to renovate his official lodgings in Downing Street, which are taxpayer-funded.

He also claimed that Johnson had mulled blocking an internal inquiry into leaks to the pressbecause a close friend of the prime minister's fiancee, Carrie Symonds, could have been implicated.

Neither Cummings nor Johnson enjoys great credibility among the UK public, with a YouGov poll last week finding just 14% of respondents trusted the former to tell the truth, while 38% trusted the prime minister.