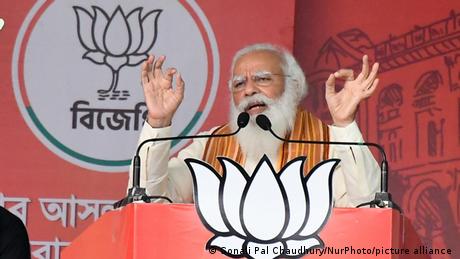 Indian Prime Minister Narendra Modi, like most politicians seeking to remain in public office, is highly conscious of his image and managing public perception.

However, Modi's willingness to expend energy on maintaining his public image while India reels under the devastating second wave of the coronavirus pandemic has been called a colossal mismanagement of governance by his critics.

This criticism comes as as people publicly questioning the government's handling of the crisis have faced threats, intimidation, and arrests.

These activities were previously limited to the ruling party's spokespersons and its army of online supporters.

In January, India launched an initiative to distribute millions of its domestically produced coronavirus vaccinesto countries around the world.

The "vaccine diplomacy" drive was seen as an effort aimed at bolstering the global image of India, and by extension, Prime Minister Modi.

Three months later, the initiative was suspended after India's domestic vaccination drive was hampered by a shortage of doses as the daily number of coronavirus infections and deaths in India shattered world records.

Hundreds of thousands died due to a lack of essential medical supplies, as hospitals across cities became overwhelmed.

India also began receiving foreign aid such as ventilators and oxygen tanks, marking a major shift from its 16-year-long policy of not accepting help from abroad.

As a result, Modi's domestic and international image has taken its biggest thrashing since he rode to power in 2014.

Government credibility ratings have also plunged, with experts saying the actual number of infections and COVID-related deaths could be almost two to three times higher than official figures.

Modi's government received criticism not just from the political opposition and civil society, but also from quarters that previously defended his every move, from demonetization to last year's migration crisis.

The BJP and Modi's image managers have responded by accusing critics of conspiring against the government to create what they have called a "false narrative."

"The government still appears to be obsessing about electoral fortunes and maintaining the popularity of the party leadership," Meenakshi Ganguly, South Asia director at Human Rights Watch, told DW.

"Politicians presumably seek public office because they have a genuine interest in delivering good governance and upholding rights," she said.

"Hiding the truth, aggressively deflecting criticism, and punishing the messenger, is not good governance."

Ganguly said that ideas for dealing with the pandemic coming from opposition parties or civil society groups were undermined by the government.

She added that senior BJP ministers were engaging in petty public squabbles.

In one instance, Foreign Minister S. Jaishankar and the youth wing of the opposition Congress party got into a social media spat after the latter provided oxygen supplies to foreign embassies in New Delhi.

Indian embassies around the world have also been embroiled in the government's image management exercises.

Last month, Foreign Minister Jaishankar instructed Indian envoys to counter the narrative in international media that Modi and his government have been incompetent in dealing with the COVID crisis, the Indian Express newspaper reported.

Baijayant "Jay" Panda, a BJP vice president and spokesperson, however, has denied accusations that the government has been overly focused on managing bad press.

"Very little effort has been devoted to 'managing the narrative,'" he told DW in an emailed response.

"It is shocking to see a concerted effort by many to deliberately paint only a negative picture of India," Panda said.

"For example, many Western media have been hypocritical in their India coverage, by flouting their own domestic practice of covering tragic news without compromising sensitivity to human dignity," he added.

He also accused the opposition parties of being hypocritical by blaming the government for measures, such as easing restrictions, that they had been publicly advocating earlier this year.

Late Monday evening, Indian police visited the offices of Twitter in Delhi to inform the social media platform of an investigation into a BJP party spokesperson's tweet that was labelled on the platform as "manipulated media."

The Delhi Police, which comes under the purview of the central government, said the visit was part of a "routine process."

At the core of the investigation is a "toolkit," allegedly created by the Congress party as a method for highlighting and publicizing criticism of the BJP government's failures in handling the pandemic and its response to farmer protests.

Pratik Sinha, co-founder of the Indian fact-checking website Alt News, said the toolkit saga shows that the Modi government is heavily focused on diverting public attention from its pandemic policies.

"This is not just image management but a well-thought diversionary mechanism," Sinha told DW.

"The pandemic is still raging, and people are still dying. So how do they distract people? By using these antics. They are simply picking up non-issues to distract people."

"A large population of the country is not questioning the government on core issues, such as why no other country in the world has had to deal with problems like black or yellow fungus during the pandemic," he said.

Sinha added that not only does the government distract people from important issues, but it also spreads "so much propaganda that many people are not sure what to believe and what not to believe."

He argued that it wasn't just during the pandemic that the government has deployed these tactics.

"But the deficit of trust in the government is far greater now and which is why we see their efforts have also ramped up to some extent."