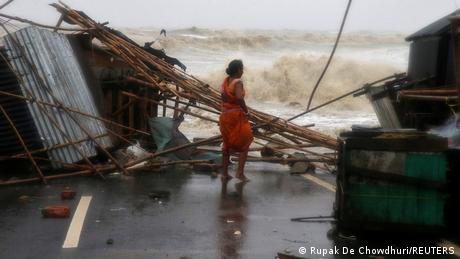 A powerful cyclone made landfall in eastern India on Wednesday, as disaster authorities warned of tidal surges and gusting winds above 155 kph (95 mph).

Over 1.5 million people in the eastern states of Odisha and West Bengal were evacuated ahead of Cyclone Yaas. Television showed rough seas and strong winds and rains lashing Odisha, while shops and homes were boarded up.

The ''very severe cyclonic storm'' has sustained winds of 130-140 kilometers per hour (up to 87 mph) that are gusting up to 155 kph (97 mph), the India Meteorological Department said, adding that the storm would cross the two affected states by noon.

Weather authorities said that landfall began around 9:00 am (3:30 GMT) and warned that it would generate waves higher than rooftops in some areas. The storm's winds were expected to weaken to 75 kph by Wednesday evening, the meteorological department said.

The storm destroyed tens of thousands of homes and forced the closure of the busiest regional airport in Kolkata, as well as the Bhubaneshwar airport. The Kolkata airport was closed to flights until Wednesday evening. Train services were also canceled ahead of the storm.

West Bengal's chief minister, Mamata Banerjee, told reporters that about 20,000 mud houses and temporary shelters had been damaged in the state.

"I have not seen anything like this before," said another state minister, Bankim Hazra. "Successive high tides battered the coastline," he added.

"It is inundation all around and villages are cut off." He made the comments after seawater flowed into the low-lying areas of Sagar island in the Bay of Bengal and the tourist town of Digha, where a police station was flooded.

Police said they had rescued 10 people after their boat capsized near shore in Odisha's Jagatsinghpur district on Tuesday. The naval base Chilka was also monitoring ships in the area and was prepared for rescue operations, the Indian Navy said.

Second cyclone in a week

Yaas is the second storm to hit India within a week, after Cyclone Tauktae pummeled the western coast, resulting in mass evacuations and over 150 deaths.

Cyclones in the Bay of Bengal are common at this time of year, but experts say that they are becoming more severe in conjunction with global warming.

Both Yaas and Tauktae halted regional COVID-19 prevention efforts, as mass evacuations took precedence. Odisha officials said they had suspended testing, vaccination and a door-to-door health survey in three districts in the path of Yaas.

The state's chief minister, Naveen Patnaik, urged people being moved to cyclone shelters to wear double masks and maintain social distancing. "We have to face both the challenges simultaneously,'' Patnaik said.

This is a developing news story and will be updated.