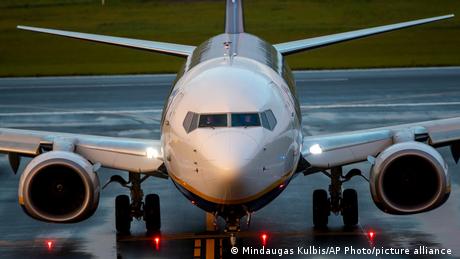 European Union leaders called Sunday's military interception of a Ryanair passenger plane and the subsequent arrest of an opposition blogger a "hijacking," an "attack on democracy" and an "international scandal."

Prior to his arrest, Raman Pratasevich, a known critic of authoritarian President Alexander Lukashenko, was traveling from Greece to Lithuania. Minsk ordered the commercial plane flying over its airspace to land, claiming a bomb was on board — an explanation German Chancellor Angela Merkel has called "completely implausible."

Belarusian state TV has since broadcast a video, showing Pratavesich with dark marks on his face, acknowledging his role in recent anti-government protests. The opposition says he was forced to film the statement.

When EU leaders met on Monday in Brussels, they called for the immediate release of Pratasevich and his girlfriend. They also unanimously agreed to hold Belarus accountable.

"Lukashenko and his regime have to understand this will have severe consequences," European Commission President Ursula von der Leyen said.

But what are the consequences and what do they entail?

Since Belarus intercepted a flight between two EU countries, the 27-nation bloc also decided to hit back in the skies. It has banned Belarus’ airlines from its airspace and airports, as well as urging EU-based plane carriers to avoid flying in Belarusian airspace.

Lufthansa, KLM Royal Dutch Airlines and Scandinavian Airlines are among the airline companies that have already started doing this.

But such a move is largely symbolic and does not have any real effect on Lukashenko’s politics, according to Dzianis Melyantsou of the Minsk Dialogue Council on International Relations.

He says the measure could actually make Belarus more dependent on Russia as the restrictions could bankrupt the country’s state airline — which could then be bought out by Russia. Melyantsou also observed that pro-European sentiment among Belarusians gets stronger the more they can travel to the EU.

"Restrictions that isolate the Belarusian people as opposed to the Belarusian government could turn Belarusians against the EU," said Melyantsou. "That’s why these rushed decisions won’t have any effect."

EU leaders called on the International Civil Aviation Organization (ICAO) to investigate the plane diversion. The ICAO is a specialized UN agency that can issue standards and recommendations, but does not have any regulatory power.

Sanctions on individuals and businesses

Since October 2020, the EU has progressively been restricting more and more key political figures, including President Alexander Lukashenko, with measures like travel bans and asset freezes. They first came as a response to Belarus’ crackdown on peaceful protesters.

With the arrest of Pratasevich, the bloc decided to add even more targets to its sanction list of 88 individuals and seven entities.

"There will be additional sanctions on individuals that are involved in the hijacking, but this time also on businesses and economic entities that are financing this regime," von der Leyen told reporters.

According to Pavel Usov, director of the Center for Political Analysis and Prognosis in Warsaw, these measures are necessary to signal to Lukashenko that he does not have a carte blanche to treat his citizens any way he wants. But in practice, they do not have much of an effect on him.

"Lukashenko is propagating terror in his country and abroad. In reality, neither sanctions nor international agreements will deter him," said Usov. "They won’t necessarily lead to a quick change in the country, but these measures are imperative."

Billion-euro economic package is off the table

Von der Leyen also announced that the EU has a €3 billion ($3.6 billion) investment package ready for Belarus that it will now freeze until the country "turns democratic."