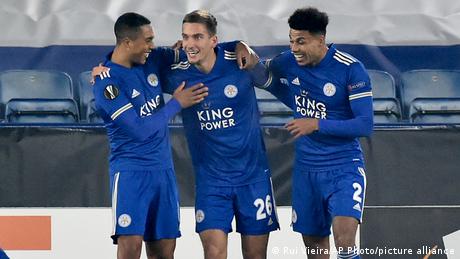 It has been a rollercoaster few weeks for the Thai owners of the England-based Leicester City Football Club.

The big win comes after the team finished in the top six for the last two seasons, and Srivaddhanaprabha has become a success story among Thai football club owners.

"Looking at the picture as a whole, it's not such a positive impression," Chadwick said. "Thai owners haven't been bad, but they haven't achieved the level of success as Leicester, nor have they gone about their business in the same way," he added.

How did Thailand get involved in European soccer?

But his tenure lasted just over a year and was tainted by controversy.

Sven-Goran Eriksson, the club's manager during most of Thaksin's brief reign, asserted in his autobiography that the former Thai prime minister "didn't understand football."

Another success story was the Thai chairman and joint owner of Oxford United, Sumrith Thanakarnjanasuth, who bought into the lower-league club in 2018 and saw his side narrowly miss out on promotion to the championship this month after losing a semifinal playoff.

"Generally, I don't think there is a homogeneous approach to ownership based on where investors are coming from," Ben Marlow, a Singapore-based managing director of the sporting analytics firm Twenty First Group, told DW.

What are the keys to success?

"We have tended to see success follow those investors who spend sufficient time up front, defining their objectives and identifying clubs that are suitable through realistically assessing what it would take for a club to achieve those objectives based on full understanding of the situation today," Marlow said.

"The Leicester owners are a good example of that, having been careful in their pursuit of their objectives and through investing over a long term time horizon," he added.

Vichai Srivaddhanaprabha, the founder of King Power group, who was killed in a helicopter crash at King Power stadium in Leicester, was able to build a "positive ownership legacy with fans at the center," said James Skinner, the director of the Institute for Sport Business at Loughborough University,

"While they have invested in on-field performance, they have also worked off the pitch by building strong links into the community," Skinner added.

In 2017, the King Power Group also bought the struggling Belgium side Oud-Heverlee Leuven, which has since become a mainstay in Belgium's first league.

According to Chadwick, this fits the group's long-term plan to purchase a struggling team from a provincial city but with long-term fan engagement.

Chadwick said the King Power Group could soon expand its ownership to other European countries, targeting clubs similar in stature and history in the Italian or Spanish leagues

Much attention has been paid to how Manchester City and Paris Saint-Germain — essentially owned by the Emirati and Qatari states — are key to the Middle Eastern countries building "soft power" connections in Europe.

In mid-2020, the Tourism Authority of Thailand partnered with Leicester City to promote its "Thailand Smiles With You" campaign.

The campaign aimed to boost recognition of Thailand’s tourism industry, which has been decimated by the pandemic. The slogan was printed on the front of the team's jersey for the rest of the season.

The signing ceremony was presided over by Thai Prime Minister Prayut Chan-o-cha.

Srivaddhanaprabha's connection with Thailand's military government has drawn criticism during an ongoing clampdown on pro-democracy protesters.

"Essentially Leicester City is funded by and owned by a family that is complicit in civil unrest, military interventions inside Thailand, and nobody says anything about this," Chadwick said.

"If this was Saudi Arabia or Qatar or China, you could imagine it would be labeled 'sportwashing,'" he added.