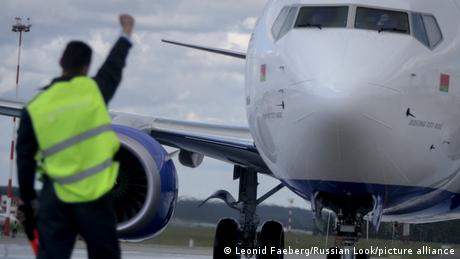 Several European airlines announced on Tuesday that they are suspending flights over Belarus after Minsk forced a Ryanair jet to land to arrest a dissident journalist.

European Union leaders had urged airlines to avoid Belarus' airspace as they imposed sanctions against the government of longtime leader Alexander Lukashenko.

Western leaders accused Belarusian authorities of hijacking the passenger plane during its flight on Sunday, while Minsk claimed it was trying to secure the jet after receiving a bomb threat.

Which airlines are affected?

Air France said in a statement it had "taken note" of the conclusions of Monday's EU summit and had suspended flights over Belarus "until further notice."

Singapore Airlines is also rerouting flights "that are bound for Europe to avoid the Belarusian airspace" and will continue to "closely monitor the situation," AFP news agency quoted a spokesperson as saying.

How has the Belarusian opposition reacted?

Exiled Belarusian opposition leader Sviatlana Tsikhanouskaya on Tuesday called on Western leaders to ramp up pressure on the Belarus government.

"The situation with the hijacking of the plane cannot be considered separately from other repressions and flagrant violations of human rights in Belarus," Tsikhanouskaya said.

In a call with US National Security Advisor Jake Sullivan, Tsikhanouskaya "called on the United States to isolate the regime and pressure it through sanctions," she said on Twitter.

The opposition figure also said that she asked for the Belarusian opposition to be invited to next month's G7 summit in Britain.

"All of this is a result of the regime's impunity and the lack of a decisive response from the international community," she added.

How have world powers responded so far?

The United Nations rights office demanded the immediate release of 26-year-old Raman Pratasevich, the Belarusian activist journalist who was detained after the plane landed on Sunday.

"We are shocked by the unlawful arrest and arbitrary detention," spokesman Rupert Colville told reporters in Geneva.

"The manner, through threat of military force, in which Protasevich was abducted from the jurisdiction of another state and brought within that of Belarus, was tantamount to an extraordinary rendition."

The EU has since banned Belarusian carriers from flying over the bloc's airspace. The bloc also called for the release of Pratasevich.

NATO Secretary-General Jens Stoltenberg welcomed the EU sanctions, adding that the "forced landing of a passenger flight by Belarus was dangerous."

US President Joe Biden said his administration was looking into "appropriate options to hold accountable those responsible, in close coordination with the European Union."

What has Belarus said?

Belarus, which said it stopped the plane over a security threat, claimed Western countries were making "unfounded accusations" about the event for political reasons.

On Tuesday, Belarus said it had invited European, US and international aviation officials to investigate the incident.

Russia, an ally of Belarus, has defended Minsk's handling of the crisis.