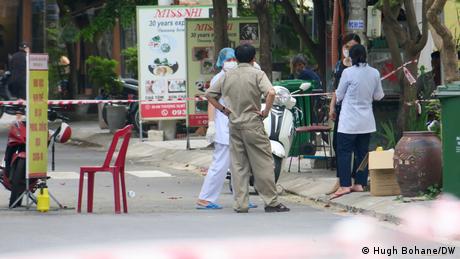 Vietnam is stiffening regulations to contain a new spike in COVID cases, after having mostly kept the virus at bay throughout the pandemic.

In 2020, Vietnam earned widespread praise for its coronavirus response, which had kept case numbers relatively low in comparison to other countries.

Although Vietnam has reported just over 5,400 total COVID cases, over 1,000 of those cases were reported during the past week, according to data complied by Johns Hopkins University.

Vietnam's seven-day incidence rate, which measures the number of new COVID cases over a week per population of 100,000, is currently at 149. On April 25, that number was at just over eight cases per 100,000 people.

As authorities try to stop the spread, there are concerns lockdowns will hamper Vietnam's tourism sector and the overall economy.

How is Vietnam responding to the outbreak?

Many of Vietnam's new COVID cases are being reported in northern and central provinces. Strict public health measures have been imposed in the capital, Hanoi, the tourist hot spot Da Nang and the provinces Bac Giang and Bac Ninh.

Non-essential services such as dine-in restaurants, bars, karaoke clubs, and massage parlors are mostly shut for an indefinite period of time.

Supermarkets and pharmacies are still open and food deliveries and other essential services remain available. But people are being told to stay at home to curb the spike in infections.

Travelers returning to Vietnam carrying the so-called Indian variant of the virus and Chinese migrants entering Vietnam without valid paperwork are being blamed for the latest outbreak.

Vietnam shares a long land border with China to its north and maintaining border security is a constant challenge for authorities.

Earlier this week, five Chinese migrants were arrested after they were caught illegally entering Vietnam by hiding in boxes on a bus travelling from Bac Giang in northeast Vietnam to Ho Chi Minh City in the south.

Vietnam is now bolstering its border controls for neighboring China, Laos and Cambodia.

Additionally, Vietnam is only accepting high-skilled experts, diplomats and others entering with official passports. Travelers arriving in Vietnam must quarantine for 21 days instead of 14.

On top of that, local authorities are implementing stricter penalties for people who don't wear masks in public or spread misinformation related to the current outbreak.

In Da Nang, authorities have been cordoning off suspected virus hot spot streets, while carrying out mass-testing of residents in in buildings and asking people to remain at home for three weeks.

One Da Nang resident told DW that her street was locked down after a neighbor tested positive for COVID.

"There is a new case right across from my building and we haven't got any further information about the case yet and we are in strict lockdown," she said, without wishing to be identified by name.

Friends have been bringing her food supplies and placing them on a table at a checkpoint near the front of her apartment as she is not allowed to leave her street.

"Everything happened so quickly and most of us weren't prepared," she said.

Could Vietnam's economy be impacted?

During the global economic slump in 2020 brought on by the pandemic, Vietnam's economy proved resilient, managing an impressive 2.9% in year-on-year growth.

Kenneth Atkinson, a board member of the British Chamber of Commerce Vietnam (BritCham Vietnam), told DW that the recent COVID case spike will "have an effect on the next financial quarter."

"But by the way the authorities are controlling the industrial areas in the north, I would expect that within three to four weeks those areas will open again but there will be a lag," said Atkinson.

Atkinson added that he remains positive about Vietnam's overall economic growth in 2021. Exports to the EU are 28% ahead of last year, and foreign remittances from overseas Vietnamese are also strong, based on recent figures.