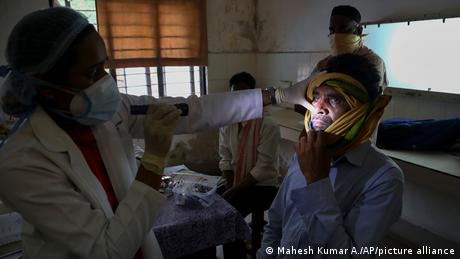 India's health ministry is asking pharmaceutical companies to ramp up production and distribution of antifungal medications after a new type of fungal infection was found in recovering COVID patients last week.

In Ghaziabad, a city in the northern Uttar Pradesh state, as many as seven recovering COVID patients have been diagnosed with invasive aspergillosis, a severe form of white fungus infection.

Similar cases have been detected in cities in the states of Gujarat, Maharashtra and Bihar.

White fungus infections are "dangerous and can affect many parts of the body including lungs, nails, skin, the stomach, kidneys, brain and mouth," BP Tyagi, an ear, nose and throat surgeon from Ghaziabad, told DW.

"Three of our 26 patients have developed both types of fungal infections. These infections develop in the post-COVID stage in patients," he added.

The white fungus cases reported across the country come after black fungus infections were declared an epidemic in six Indian states, with thousands of infections detected among recovering coronavirus patients.

Nearly 9,000 cases of black fungus infections have been reported. More than 250 people have died from the infections across India, according to government data.

The new fungal infections also come amid a shortage of Amphotericin B, a crucial anti-fungal drug.

What is a white fungus infection?

White fungus infections are named after white-colored sores that occur in patients. The sores affect the esophagus and cause difficulty in swallowing food. White patches are also commonly found in the mouth.

People at risk include immunocompromised patients, diabetics, cancer patients, and patients who have undergone organ transplants.

Fungal infections can be caused by molds present in the environment, improperly sterilized medical equipment, and lack of personal hygiene.

"Patients who are found to be infected with white fungus should be examined carefully, with a fungus culture test of their phlegm or mucus to detect fungal infection in their body," Nina Bhalodia, an fungal infection specialist, told DW.

X-ray or chest scans can sometimes predict how severe the infection is and how vital organs may be affected. According to experts, white fungus infections can cause severe lung damage.

"We have been seeing white fungus cases and there are medicines for it. But like all severe infections, there will be some who will succumb to it in spite of the medicines being available," pulmonologist Vikas Maurya told DW.

Indian physicians are also concerned about the emergence of yellow fungus infections that can have severe effects on the body's internal organs.

On Monday, a 45-year-old man in Ghaziabad was diagnosed with three different types of fungal infections during post-COVID treatment.

Traces of black, yellow and white fungi were found when tests were conducted after the man complained of swelling in the eyes and bleeding from his nose during post-COVID recovery.

Yellow fungus Infections cause pus leakage and slow healing of wounds. In serious cases, they can also cause devastating symptoms such as organ failure and acute tissue death.