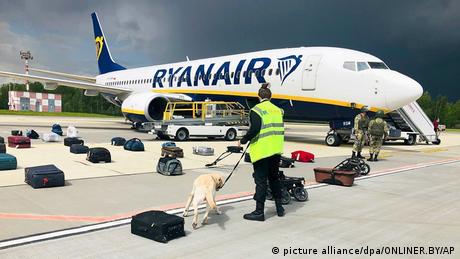 Germany joined a list of European countries to summons the Belarusian ambassador in Berlin amid shock over Minsk's forced landing of a plane and subsequent arrest of a dissident journalist.

"The explanations given so far by the Belarusian government for the forced landing of a Ryanair plane in Minsk are absurd and not credible," German Foreign Minister Heiko Maas said on Monday.

The minister said Minsk needed to be transparent about the welfare of activist journalist Raman Pratasevich and his partner. He called for the immediate release of the pair.

The EU's foreign policy chief Josep Borrell had earlier called for an international investigation over the plane's grounding.

"In carrying out this coercive act, the Belarusian authorities have jeopardized the safety of passengers and crew," Borrell said in a statement issued on Monday.

"An international investigation into this incident must be carried out to ascertain any breach of international aviation rules," the statement went on.

On Sunday, a Ryanair jet flying from Athens to Lithuania was intercepted by a Belarusian fighter jet and diverted to Minsk International Airport after being told a bomb was on board.

No explosives were found on the aircraft, but Pratasevich, a 26-year-old former editor from the Minsk-critical Telegram channel Nexta, was allegedly taken into custody. The channel played a major role in helping organize mass rallies against Lukashenko last year.

Pratasevich is a known critic of Belarus' long-time leader Alexander Lukashenko and his government.

EU to discuss 'consequences' at summit

The president of the European Council, Charles Michel, said EU leaders would discuss the incident at an EU summit, adding that the affair would not remain "without consequences."

He called on the Belarusian authorities to immediately release Pratasevich.

An EU spokesman said the leaders would discuss "possible sanctions" on Belarus.

High-level officials in the country have already been sanctioned by the bloc over the brutal repression of opposition figures, protesters and journalists following disputed elections in August 2020.

The EU on Monday summoned the Belarusian envoy to condemn the forced landing and arrest.

How could the EU respond?

DW's Bernd Riegert, who is following the summit, said that "the most likely sanctions are targeted sanctions, or smart sanctions, as they call it here in Brussels."

These include asset freezes and restrictions on travel for sanctioned individuals, he said, along with cutting Belarus off from the SWIFT banking system internationally.

"All EU leaders are on the same page, even the direct neighboring countries like Poland and the Baltics. It seems as though Belarus has crossed a red line," he said.

A NATO official has said ambassadors to the Western military alliance will also discuss the incident on Tuesday.

French President Emmanuel Macron's office said France and its European partners were considering a ban on airlines flying over Belarus and on prohibiting Belarus' national carrier Belavia from using EU airports. It said ground transit links with the EU might also be suspended.

Lithuania has already said flights over Belarus will not be allowed to use Lithuanian airports as of Tuesday from 3 a.m. local time (00:00 UTC). Scandinavian airline SAS has said it will avoid Belarusian airspace following a recommendation from the Swedish Transport Agency.

At least four people, including Pratasevich's Russian girlfriend, Sofia Sapega, did not reboard the plane. The head of the Lithuanian criminal police confirmed that 125 passengers had been on the plane when it left Athens, while only 121 arrived in Vilnius, according to Reuters news agency.

The European Humanities University (EHU) attended by Sapega said on Monday she had been arrested along with Pratasevich. The EHU was founded in Minsk 19 years ago, but Belarusian authorities forced it to move to Lithuania in 2004.

In an interview with DW, an adviser to opposition leader Sviatlana Tsikhanouskaya, Franak Viacorka, said Pratasevich was now "in the hands of the cruelest regime in Europe" and voiced concern for his safety.

German airline Lufthansa said it suspended the departure of a flight from Minsk to Frankfurt on Monday after it also received a "security warning" from the Minsk airport. The plane was later cleared for departure after airport authorities said an email warning of a "terror attack" was not substantiated.

How has Belarus reacted?

The Belarusian Transport Ministry on Monday announced it had set up a commission to carry out its own investigation into the forced landing and would publish the results soon, according to a report by the Russian news agency RIA.

The Foreign Ministry decried what it called "belligerent'' EU statements and said Belarusian authorities had acted "in full conformity with international
rules.''

RIA also cited the ministry as saying that Minsk was prepared to let experts visit and see data if an international probe is required.

Belarus' major ally, Russia, appeared to make fun of Western outrage at the incident, with Foreign Ministry spokeswoman Maria Zakharova writing on Facebook: "We are shocked that the West calls the incident in Belarusian air space 'shocking.'" She accused Western nations of themselves carrying out "kidnappings, forced landings and illegal arrests."

What did Ryanair say?

O'Leary said his company believed that some Belarusian secret service agents had been on the plane as well.

He told state broadcaster RTE that sanctions on Belarus with a "real edge" were needed in response.

The low-cost airline Ryanair is headquartered in the Irish capital, Dublin.