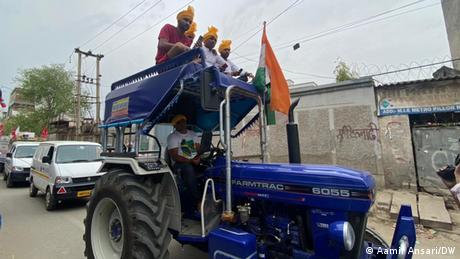 Soon after Cyclone Tauktae hit the western coast of India last week, the capital city of New Delhi was hit by record rainfall. While some had the luxury of staying indoors, thousands of protesting farmers sought shelter under sheets of tarpaulin.

India is currently grappling with one of the largest coronavirus outbreaks in the world. More than 300,000 people have died from COVID-related causes so far, but experts think the actual number could be much higher.

Undeterred by the virus surge, farmers are continuing to call on Prime Minister Narendra Modi's government to repeal three controversial agricultural reforms that they say will leave them at the mercy of corporations.

While their "revolution" is no longer grabbing headlines, they say they are in it for the long haul.

"Going back is not an option," Swaiman Singh said. The US-based cardiologist joined the movement in its early stages. He and his team run a clinic for protesters at Tikri, on the state border between Delhi and Haryana.

"This is unlike any protest the world has seen before. It is not a matter of days or months; the farmers are ready to stay here for years if that's what it takes to preserve their livelihood," he told DW.

Singh called for the government "to step up," calling on them to "scrap the laws and let them go back home."

What are these protests about?

The government said the changes would give farmers the freedom to sell their produce anywhere in the country and enter into contracts with unlicensed buyers at a pre-agreed price.

However, the farmers argue that they always had the freedom to sell anywhere in the country. They accuse the government of avoiding its responsibility to ensure farm produce is acquired at the minimum support price (MSP). As such, they fear the reforms leave them at the mercy of corporations who can now enter India's farming sector with no government safeguards in place.

Increasingly, protesters are donning face masks or pieces of fabric to cover their mouths and noses at the protest site at Tikri. But there are many who are walking around with their faces uncovered.

Singh and other volunteers are using a central stage to spread awareness about the virus, as well as distributing hand sanitizers and masks to protesters of all ages.

"We carry out random temperature checks and get people tested routinely, but no active cases of the virus have been recorded here," Singh said. "In addition, we also visit nearby localities in Delhi and Haryana to treat regular patients — not just farmers — who are unable to get help from the authorities."

"While regular hospitals face a lack of supplies, we are setting up our own facilities to keep the situation under control," Singh added.

He drew up extensive lists and contacted authorities requesting vaccines for the protesting farmers but he was met with silence. Similar requests were also made by farmer union leaders.

"The government itself has no vaccines, how will it fulfill our medical needs?" Singh asked.

Months after talks between the government and farmers were suspended, the Samyukta Kisan Morcha, an umbrella body of 40 farmers' unions, reached out to Modi, asking for talks to restart.

"We … are writing this letter a few days before our struggle completes six months on 26th May 2021," the letter said. "On the same day, your government, the most anti-farmer government that this country has seen, completes seven years in office."

They have called for a nationwide day of protests on May 26. Several opposition politicians have already come out in support.

Under fire for its handling of the deadly second wave, the government has accused farmers of worsening the situation by continuing their agitation.

In the state of Haryana, which borders Delhi, Chief Minister and BJP leader Manohar Lal Khattar said: "The rise in cases in rural areas is because of the [farmers'] dharnas [protests]. Many villages have seen a spike as people are coming from and going back [to dharna sites]."

But farmers unions denied the allegations, saying: "Not a single ambulance or essential goods service has been stopped. It is the government that has put up strong and multilayered barricades, not the farmers. Farmers are fighting for human rights and they support rights for all humans."

Farmers also hit back at allegations that they are responsible for the spread of the virus. Instead, they have highlighted the government's insistence on holding large political rallies and religious gatherings in the past couple of months amid the raging pandemic.

Is it time to go home?

While many say that this is not the right time to be protesting on the streets, farmers insist that going back to their farms is not an option.

"Over a year after the COVID-19 crisis first hit our country, the government isn't prepared to tackle it. Instead, they want to use it as an excuse to end our movement," Sukhwinder Singh Sabhra, a member of the Kisaan Mazdoor Sangharsh Committee, told DW.

"Nearly 500 farmers have lost their lives during these six months of agitation. Many more will lose their livelihoods if we step away now," he explained.

Sabhra suggested that the government could offer them vaccinations, instead of creating panic and fear.

The government has shown willingness to restart talks with the protesting farmers. But the farmers insist that these remain empty words until the government addresses their grievances.

It has been six months since they reached the outskirts of Delhi. They have seen the seasons change — from the biting cold to the oppressive heat, punctuated with heavy downpours. They long to go back home, but returning without the repeal of the laws would mean signing their own death warrant, the farmers maintain.