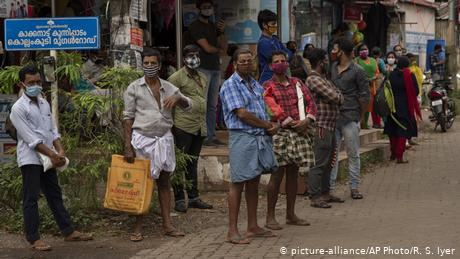 India's second coronavirus wave has claimed the lives of thousands of people daily since the beginning of May, with over 75,000 COVID-19-related deaths recorded so far this month, according to Health Ministry data.

On Wednesday, authorities recorded 4,529 fatalities due to the illness, its highest single-day death toll.

April was the worst month for the country in terms of the number of infections, with close to 7 million cases detected.

Experts believe the actual infection and death numbers could be five to 10 times higher.

The surge in cases has overwhelmed the nation's poorly funded and dilapidated public health infrastructure, with many states suffering from acute shortages of medical oxygen, essential drugs, beds, health workers and vaccines, among other vital supplies.

The spread of the virus has become rampant in rural areas where cases can go unreported due to a lack of testing.

Nevertheless, some states and cities have managed the health emergency better than others.

The nation's financial capital Mumbai, in western Maharashtra state, has come a long way from being the epicenter of the virus outbreak in the region to a city with a successful containment model.

Coronavirus cases in the city started to peak in February this year. On April 4, Mumbai counted its highest single-day surge of 11,206 fresh cases.

But in recent days, the metropolis — with a population of over 12 million — has been recording a decline in infections, with 1,425 new cases recorded on Wednesday.

In addition to controlling the virus spread, the city administration has been hailed for making sure that there are enough hospital beds, essential drugs and oxygen supplies, among others, to cope with the demand.

"We are on auto-pilot now and prepared for any contingency. There is not a single case where someone who needed an oxygen-equipped bed didn't get one," Iqbal Singh Chahal, the commissioner of the city's municipal corporation, told DW.

Chahal said Mumbai had adopted a decentralized approach to managing the health crisis, setting up command posts in each of the city's 24 wards, equipped with ambulances, doctors, telephone operators and basic health infrastructure.

The city administration has also focused on effective management of medical oxygen, ensuring that there are enough supplies of this critical resource to treat severe COVID-19 patients.

India's Supreme Court has also praised Mumbai's handling of the crisis and urged other states, including the capital New Delhi, to emulate the model to fight the pandemic.

"I have an outstanding team. We have not let our guard down and will overcome hurdles, including getting people vaccinated," added Chahal.

The southern state of Kerala has also managed to keep the active caseload curve flat and mortality low since the start of the pandemic.

The state has so far recorded more than 2.2 million infections and over 6,600 deaths, resulting in a case fatality rate of about 0.32%, which is India's lowest.

Leading from the front was K. K. Shailaja, who served as the state's health minister for the past five years, until May 2021.

"We did everything scientifically possible to contain the spread, delay peaking and use that time to augment infrastructure," Shailaja told DW. "At the peak of the COVID-19 pandemic in the state, just 50% of the ICU beds were occupied and occupancy of ventilators was below 40%," she added.

Early identification of susceptible patients and triggers for monitoring a deterioration in admitted patients has helped keep the situation under control, say observers.

In addition, evidence-based health management and effective nursing care for the prevention of secondary infections has been crucial to keeping the number of fatalities low.

Experts say that the southern states of Karnataka and Andhra Pradesh have also been doing relatively well, by incorporating expert-led technical advice into their policies.

Government decision-making in those states is being driven by the input given by epidemiology committees.

"The Andhra committee monitors matters on the ground closely. It looks to see where testing is weak, the quality of testing and delays, the hospital and ICU occupancies," Gautam Menon, public health expert and a professor of physics and biology at Ashoka University in Sonipat, told DW.

Since the onset of the pandemic, many states have put in place measures to strengthen their health care infrastructure.

Still, the Indian government's spending on public health care continues to be abysmally low at a meager 1.3% of GDP, below that of some countries in South Asia like Sri Lanka and Bhutan.

The huge shock delivered by the pandemic could now serve as a wake-up call for authorities to overhaul and modernize the nation's ill-equipped health system.