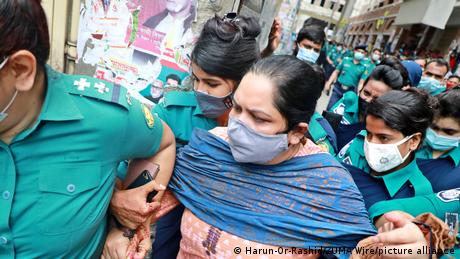 Islam, known for uncovering official corruption involving the Ministry of Health , is a reporter for the Bangladeshi daily newspaper Prothom Alo.

The journalist allegedly used her cellphone without permission to photograph documents related to government negotiations to buy coronavirus vaccines.

She is said to have taken the pictures while waiting in the office of an official involved in the process, according to the case filed against her under Bangladesh's Official Secrets Act.

What happened on the day of arrest?

Islam, 42, was held for more than five hours late Monday in the room of a personal assistant of the secretary of the Ministry of Health, her sister Sabina Parvina has said.

Islam's family said she was physically and mentally harassed while being held, before being handed over to police.

"Islam was detained by the officials for hours and harassed by them, which is completely illegal … the officials should be punished for such harassment," Miti Sanjana, a lawyer practicing in the Supreme Court of Bangladesh, told DW.

Sanjana said maximum punishment for offenses under the Official Secrets Act ranges from 14 years of imprisonment to as far as the death penalty if charged and convicted.

"This is a black colonial-era law that carries ridiculously harsh penalties which need to be reformed," she said.

Islam was denied bail and sent to jail after appearing in a Dhaka court on Tuesday, lawyer Ehsanul Haque Shomaji said. She is due for her next appearance on Thursday.

Why has Islam been arrested?

Sajjad Sharif, the managing editor of Prothom Alo, thinks that Islam was arrested because of her investigative reporting that unearthed several corruption incidents in government sectors.

A number of Islam's recent stories have drawn international attention to the millions of dollars spent procuring health equipment during the coronavirus pandemic.

"Bangladesh's health sector is particularly in the spotlight since the COVID pandemic hit the country last year. Rozina Islam has written several reports on the corruption and mismanagement of the sector recently," Sharif told DW.

"We think her reports have embarrassed some powerful people, and she has become a victim of their outrage," Sharif stressed.

What is the Official Secrets Act?

"She was also taking away some documents. An additional secretary and a policeman challenged her at the time. Later, the policewomen were called in,'' he said.

Dhaka-based lawyer Ishrat Hasan says Islam shouldn't be punished for carrying out her duties as a journalist and that her alleged actions do not pose a national threat.

"The apparently pictured non-disclosure documents are still a draft and haven't been signed off. Moreover, there is no claim of communication with an enemy, or foreign agent, and documents are not directly or indirectly useful to any enemy whatsoever," she told DW.

Hundreds of local journalists have taken part in protests demanding the immediate release of the journalist. The international Committee to Protect Journalists has also called for her release.

"Rozina Islam has been working as an investigative reporter for years and a very known face to the sectors she reports about. I think she was trapped by the people who want to stop her from reporting independently," Farida Yasmin, president of Bangladesh's press club, told DW.

"We demand her immediate release from prison, and those who harassed her should be brought to justice," she said.

Rights groups say a government crackdown on the media has intensified during the coronavirus crisis in Bangladesh.