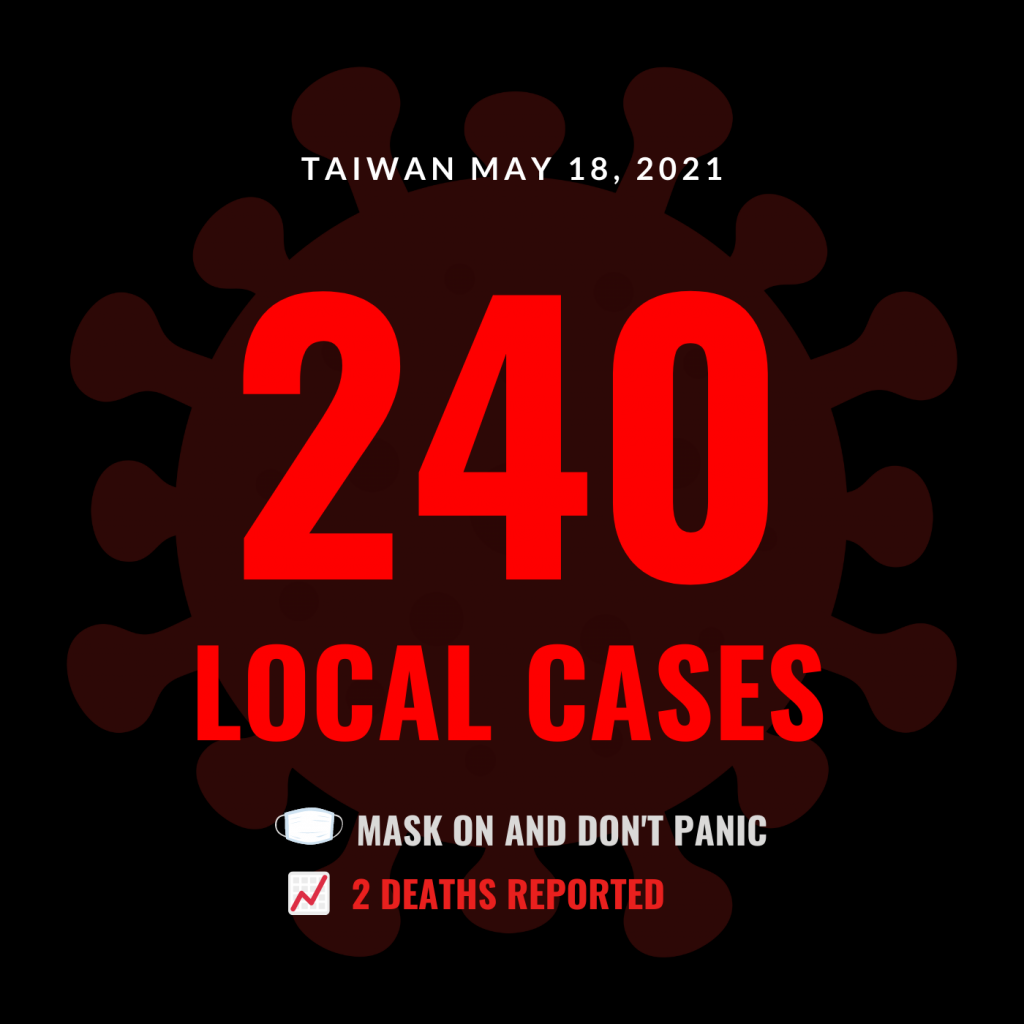 Health Minister and CECC head Chen Shih-chung (陳時中) announced 245 new coronavirus cases, including five imported and 240 local infections, a 28 percent drop from the previous day. Two deaths from the virus were announced as well, the first since April 24, bringing the total number of COVID-related deaths since the start of the pandemic to 14.

The latest cases include 112 males and 128 females between the ages of five and 90, and the dates of symptom onset and testing range from May 5 to 17. As for the places of residence, 106 cases were in New Taipei (33 in Zhonghe District), 102 in Taipei (48 in Wanhua District), 12 in Taoyuan City, 10 in Changhua County, three each in Keelung and Kaohsiung, two in Hsinchu County, and one each in Hsinchu City and Yunlin County.

Epidemiological investigations found 88 cases to be associated with tea parlors in Taipei's Wanhua, while 67 had recently engaged in other activities in the district. Two were tied to the Lions Club International cluster, two went on a religious pilgrimage, and one is associated with the Galaxy Baccarat arcade cluster.

There are 29 still under investigation, and 51 infections are from an unknown source.

She developed a fever on May 10 and went to a hospital for medical treatment and testing on May 14. She was diagnosed with COVID-19 on May 16.

She suddenly collapsed at home on May 17. Paramedics rushed her to a hospital, but she succumbed to the disease that same day.

Case No. 2,095 is an 86-year-old man who had multiple chronic ailments. As he was listed as a contact of a confirmed case, he was tested on May 16.

That same day, he was diagnosed with COVID-19, with a Ct value of 25. On May 17, his condition deteriorated and he died that evening, despite doctors' efforts to resuscitate him.

The deaths bring Taiwan's death toll since the start of the pandemic to 14.

As for the imported cases reported Monday, Cases 2,071 and 2,072 are Indonesian male fishery workers in their 20s who came to Taiwan for work on May 3.

When their quarantine ended, they were tested on May 16 and diagnosed May 18.

Case No. 2,151 is a Taiwanese man in his 30s who arrived from Kyrgyzstan on May 16. A test taken upon the day of arrival resulted in a positive result on May 18.

Cases 2,152 and 2,263 are Filipino migrant workers in their 30s who arrived from the Philippines on May 4. When their quarantine ended on May 17, they were tested. They were diagnosed May 18.

Three persons (cases 530, 1,589, and 1,676) were removed as confirmed cases. The status of one recent case has yet to be determined, and 14 cases are still under investigation.

Up until now, 14 individuals have succumbed to the disease in the country, while 1,127 have been released from hospital isolation, leaving 1,119 patients still undergoing treatment.

The CECC urges the public to adopt personal protective measures such as hand hygiene, cough etiquette, and mask-wearing. It also recommends reducing unnecessary movement, activities, and gatherings as well as avoiding crowded places or areas with a high risk of COVID transmission.