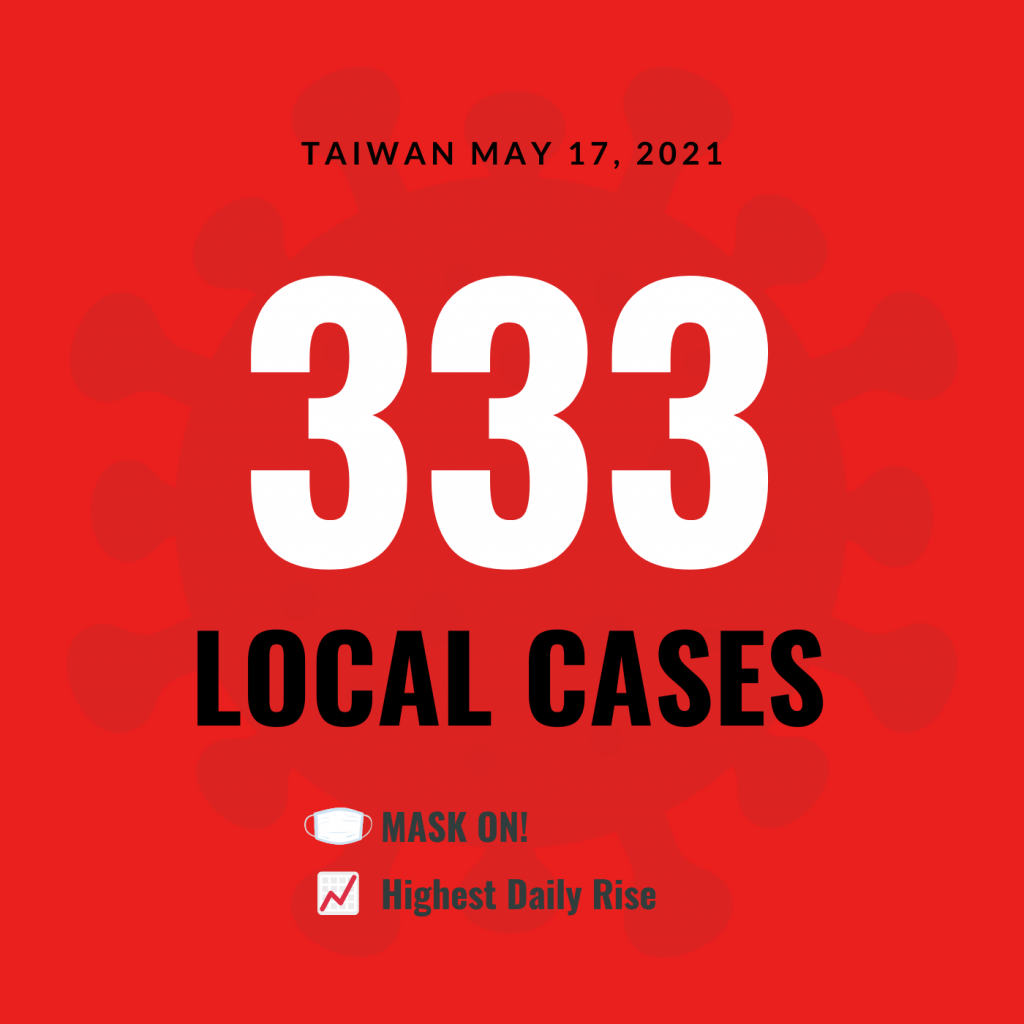 Health Minister and CECC head Chen Shih-chung (陳時中) announced 335 new coronavirus cases, including two imported cases and 333 local infections — a record one-day high for Taiwan since the pandemic began. The latest cases include 189 females and 144 males between the ages of five and 90, and the dates of onset of symptoms and testing ranged from May 5 to May 16.

As for counties and cities of residence, 158 were in Taipei (89 in Wanhua District), 148 in New Taipei (41 in Banqiao District), 10 cases in Taoyuan City, six cases in Keelung, and five cases in Changhua County. There were two cases each in Taichung City and Yilan County, while there was one case each in Hsinchu County and Miaoli County.

Epidemiological investigations found 155 cases tied to the teahouse cluster infection, 86 had a history of activities in Taipei's Wanhua District, six had taken part in a religious pilgrimage in southern Taiwan, five were from a single gathering, three are related to the Galaxy Baccarat arcade cluster, 38 are under investigation, and 40 infections are from an unknown source. Further investigations into the unknown sources are currently being carried out.

Chen said that the two imported cases include a Filipino male in his 30s and a Taiwanese woman in her 20s. The man entered Taiwan from the Philippines on April 30, while the woman flew in from Haiti on May 16.

One person (case No. 530) was removed as a confirmed case. The status of one recent case has yet to be determined, and 14 cases are still under investigation.

Up until now, 12 individuals have succumbed to the disease in the country, while 1,123 have been released from hospital isolation, leaving 882 patients still undergoing treatment.

The CECC urges the public to implement personal protective measures such as hand hygiene, cough etiquette, and wearing of masks. It also recommends reducing unnecessary movement, activities, or gatherings, and avoiding entering crowded places or areas with a high risk of COVID transmission.

Lastly, it calls on the public to actively cooperate with various epidemic prevention measures and work together to carefully protect the community's line of defense.