TAIPEI (Taiwan News) — Taiwan Semiconductor Manufacturing Co. (TSMC) said that some of its facilities had a “brief power dip” after Taiwan experienced rolling blackouts on Thursday (May 13).

Officials from science parks in Hsinchu, Tainan, and Taichung, where TSMC and other Taiwanese semiconductor firms have operations, told Reuters the blackout did not affect chipmakers.

“Certain TSMC facilities experienced a brief power dip in the afternoon of May 13 due to an outage at the Hsinta Thermal Power Plant,” TSMC said in a statement. “Electricity is currently being supplied as normal. TSMC has taken emergency response measures and prepared generators to minimize potential impact.”

Chipmaker United Microelectronics Corp. also told Reuters that production and operations at its Hsinchu facilities “remain normal because there was no power outage nor voltage drop.” It added that its Tainan fabs “experienced a voltage drop, but no production or operations were affected.”

Around 4 million households were affected by rolling blackouts on Thursday after four generators tripped at the Hsinta Power Plant in Kaohsiung. The outage was caused due to a malfunction of a communication system at a transformer station in the southern city, according to the Ministry of Economic Affairs (MOEA). 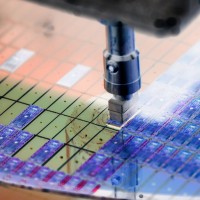