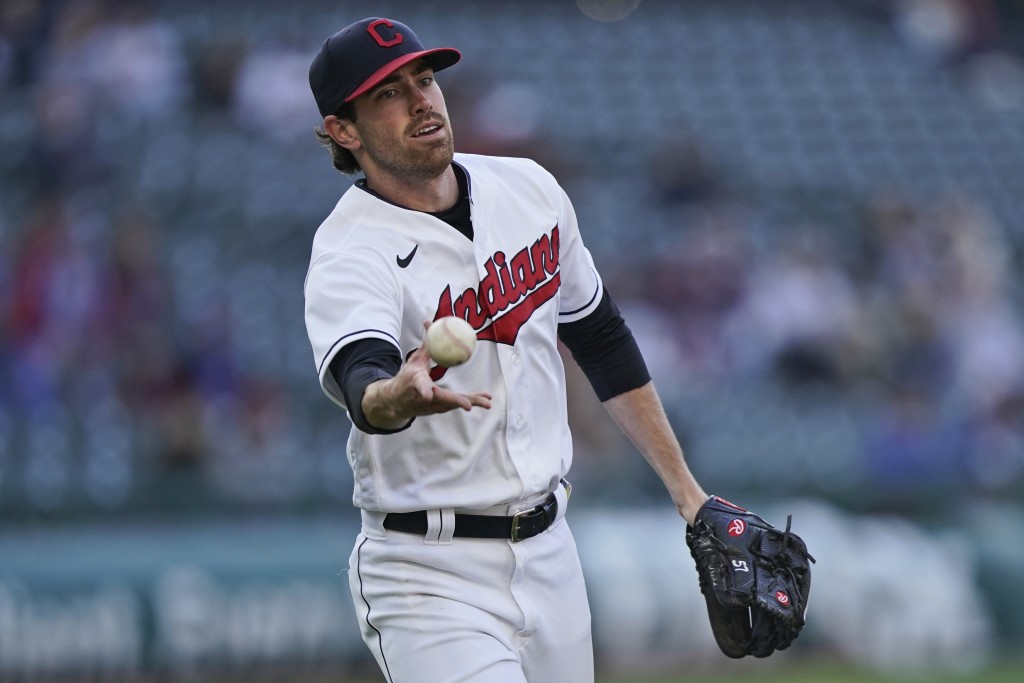 CLEVELAND (AP) — Shane Bieber pitched out of some early trouble before extending his strikeout record and César Hernández hit a two-run homer, sending the Cleveland Indians to a 3-2 win over the Chicago Cubs on Tuesday night.

Bieber (4-2) struck out eight and has now fanned at least that many in 20 consecutive starts, a major league mark he builds on every time out. The right-hander’s streak was in jeopardy, but he got Nick Martini for strikeout No. 8 in the seventh.

The reigning AL Cy Young Award winner wasn’t as sharp as usual and needed a career-high 121 pitches to go 6 2/3 innings.

James Karinchak finished the seventh for Bieber and worked the eighth. Emmanuel Clase gave up two singles in the ninth, but got Matt Duffy to bounce into a game-ending double play for his seventh save.

Hernández homered in the fifth off Adbert Alzolay (1-3), who matched Bieber for six innings.

HOUSTON (AP) — Shohei Ohtani struck out 10 in an impressive duel with Lance McCullers Jr., and Houston broke loose against the Los Angeles bullpen.

Ohtani allowed one run and four hits with one walk in seven innings, his longest start of the season. The two-way star then moved to play right field, and Yuli Gurriel homered during Houston’s four-run eighth.

Ohtani batted second and went 1 for 4, striking out twice.

McCullers (3-1) yielded three hits, including a homer by Taylor Ward, while tying a season high with nine strikeouts in going eight innings, his longest start this season. He walked two.

The Mets have won six straight.

Mazeika pinch hit in the pitcher’s spot with two on and one out against closer César Valdez and hit a grounder that scored Jonathan Villar.

Valdez (2-1) blew his third save in 11 chances. Jeurys Familia (1-0) dodged trouble in the eighth and got the win.

Matt Chapman and Elvis Andrus hit RBI singles for the A’s in the seventh inning as Oakland broke a 1-all tie. Matt Olson also had an RBI single for the A’s.

Darwinzon Hernandez (0-2) relieved Nathan Eovaldi in the seventh and took the loss.

Yusmeiro Petit pitched a scoreless eighth and Jake Diekman got his fourth save despite walking two batters in the ninth.

New York slugger Luke Voit went 0 for 3 in his first game this season. He had knee surgery on March 29.

Montgomery (2-1) gave up one run, two hits, walked one and tied a career high with nine strikeouts. After Jonathan Loaisiga worked two innings, Aroldis Chapman got three outs to get his eighth save and complete a three-hitter.

Judge started in right field after being rested Sunday and hit a first-pitch, first-inning solo homer off Luis Patiño (1-1).

Swept in the two-game series, Texas dropped to 0-5 against NL opponents this year.

Webb (2-3) allowed two runs and three hits to earn his first win in his last three starts. Jake McGee pitched a perfect ninth inning for his 10th save.

ATLANTA (AP) — Vladimir Guerrero homered and Toronto took advantage of Atlanta's indecisive fielding in the eighth inning to rally past the Braves.

Guerrero had three hits, including a tying single in a three-run eighth.

Toronto trailed 3-2 when Jonathan Davis led off the eighth with a double. Marcus Semien followed with a weak grounder to reliever A.J. Minter (1-1), who turned, hesitated and then threw too late to try to catch Davis returning to second base. First baseman Freddie Freeman also hesitated on a grounder later in the inning.

Jordan Romano survived a stressful ninth to earn his first save.

Two days after making his debut, Stokes hit an RBI single in the fourth inning. The right fielder also doubled in a run in the eighth.

Brubaker (3-2) allowed one run on five hits to win for the first time in four starts. He had four strikeouts and one walk.

The Pirates had lost eight straight games to the Reds.