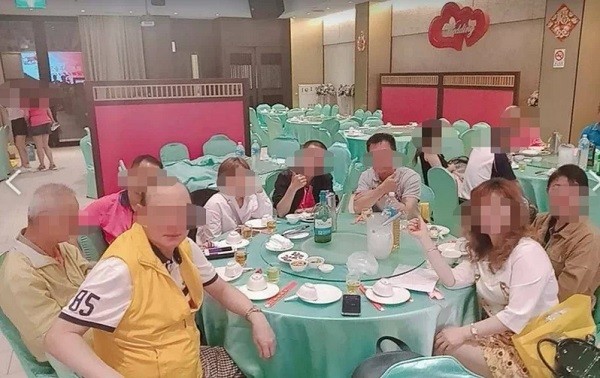 TAIPEI (Taiwan News) — A former president of a Lions Club International chapter in New Taipei reportedly tested positive for COVID-19 on Tuesday (May 11) and was photographed at a recent event not wearing a mask.

During a press conference on Tuesday, Health and Welfare Minister and CECC head Chen Shih-chung (陳時中) announced that among the seven local coronavirus cases reported that day, the source of one case's infection has yet to be determined. Chen said case No. 1,203 is a Taiwanese man in his 60s who has no recent history of traveling abroad.

On May 7, he began to experience fatigue, a cough, and chills. He was admitted to a hospital on May 9 for treatment and testing after he developed a fever, and he tested positive for COVID-19 on May 11, with a Ct value of 18*.

His source of infection is currently under investigation. The health department has identified 115 contacts in his case, all of whom have entered home isolation, and the search for additional contacts is underway.

That same day, SET News reported that the former president of the Lions Club chapter in New Taipei's Wugu District had informed fellow members that he had tested positive for COVID-19. Late on Monday evening (May 10), before his diagnosis had been made official, the man advised "group members to not venture out" and that they "need to be mentally prepared."

A source familiar with the matter told the news agency that the former president was indeed diagnosed with the virus and enjoys participating in social functions, with a wide range of friends. However, the man does not remember having any contact with any of the Novotel or China Airlines cases. The Lions Club leader was reportedly shocked to learn of his infection and is unable to determine how he contracted the disease. The fellow club member also revealed that the former president had attended a Wugu chapter meeting to mark the transfer of his role as president to his successor on May 6.

There were approximately 20 to 30 members president at the meeting and the list of attendees was provided to the health department. The club member said that the gathering was held in a restaurant in Luzhou.

According to the CECC, the man was potentially infectious on that date. It listed the venue as the Love Windmill Chinese Restaurant (大風車婚宴會館) at No. 395 Jixian Road.

In group photos of the event that surfaced on social media, none of the club members are wearing masks. They can also be seen singing together on stage.

A source who claims to be a friend of the man told UDN that the former president is about 65 years old and owns extensive properties in the Xingzhen area of Wugu District. He is said to be very active in the 300B1 chapter of the Lions Club, in which he has served as president, area chairman, consultant, and other positions.

The man is said to be very wealthy, retired, gregarious, and enjoys entertaining guests. The source expressed great concern that the virus could spread very quickly because the man interacts with many people on a daily basis.