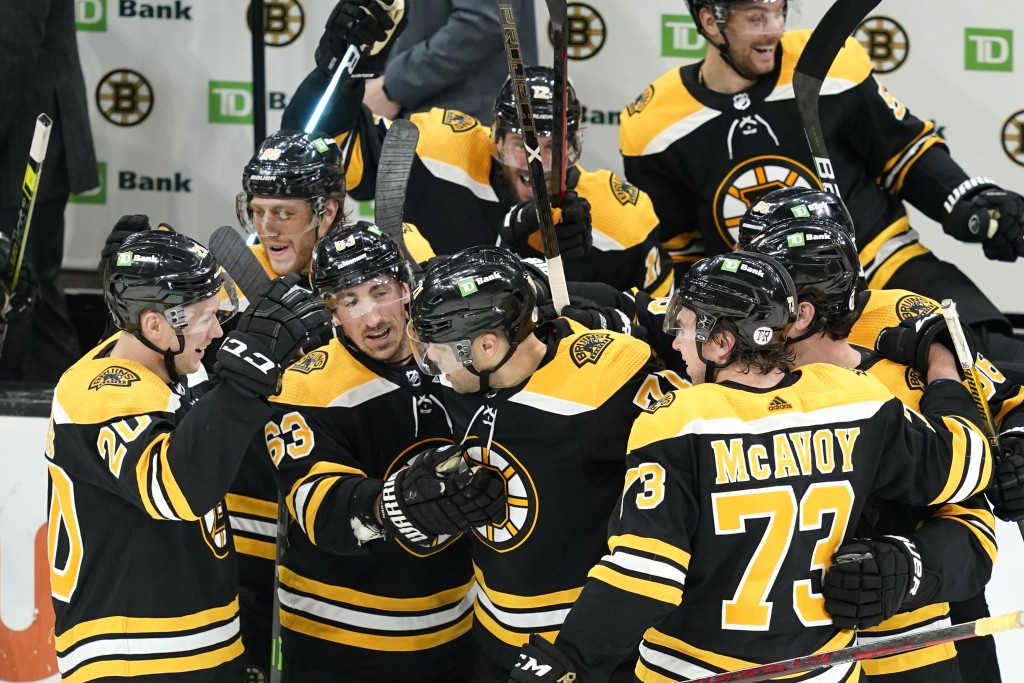 BOSTON (AP) — Taylor Hall scored his second goal of the game 2:53 into overtime and the Boston Bruins beat the New York Islanders in their home finale on Monday night to clinch third place in the East Division.

Brad Marchand also scored for Boston, which will face second-place Washington in the first round of the playoffs. Tuukka Rask had 16 saves.

Mathew Barzal and Oliver Wahlstrom scored for the Islanders. Semyon Varlamov made 25 saves before he was replaced to start the third period by Ilya Sorokin, who stopped 10 shots.

New York will face East champion Pittsburgh in the first round.

MONTREAL (AP) — Connor McDavid scored 2:42 into overtime for his league-leading 102nd point of the season and Edmonton beat Montreal as the Canadiens clinched the last playoff spot in the North Division.

Dominik Kahu, Ryan Nugent-Hopkins and James Neal also scored for the Oilers, who won their sixth straight on the road. Leon Draisaitl had two assists and Mikko Koskinen had 25 saves.

Jake Evans, Paul Byron and Artturi Lehkonen scored for the Canadiens, who lost their fourth straight (0-3-1). Montreal, which has one game left, moved nine points ahead of fifth-place Calgary, which has four remaining. Jake Allen finished with 31 saves.

Miro Heiskanen had a goal and an assist for the Stars, who had dropped six of seven. Joe Pavelski, Jason Dickinson and Joel Kiviranta also scored, and Jake Oettinger made 19 saves.

The Stars controlled play for most of the night, finishing with a 50-23 advantage in shots on goal. But they trailed 4-2 before Kiviranta and Dickinson scored 1:54 apart midway through the third.

Collin Delia made 45 stops and Alex DeBrincat extended his goal-scoring streak to seven in a row, but Chicago finished the season with seven losses in its last nine games. DeBrincat, Dylan Strome, Pius Suter and Vinnie Hinostroza each had a goal and an assist.

NASHVILLE, Tenn. (AP) — Pekka Rinne made 30 saves for his second shutout of the season as Nashville blanked Carolina to finish the regular season.

Rinne tied Tom Barrasso for No. 19 in NHL history with his 369th victory in his first start since April 10. Now 38 and in the final year of his contract, Rinne notched his 60th career shutout in what might have been his final start for Nashville as fans chanted his name early and often.

Matt Duchene scored twice, and Ryan Johansen and Tanner Jeannot each had a goal and an assist for Nashville. Rocco Grimaldi scored a short-handed goal.

SUNRISE, Fla. (AP) — Chris Driedger stopped 30 shots to record his third shutout of the season, Juho Lammikko scored a short-handed goal, and Florida secured home-ice advantage for the opening round of the playoffs.

The Lightning opened the game with the first all-Black line in NHL history -- Mathieu Joseph, Gemel Smith and Daniel Walcott. Walcott was making his NHL debut, Smith was in his fifth game of the season and Joseph has been in the lineup for all 56 Tampa Bay games in 2020-21.

Carter Verhaeghe scored a goal in his first game back from injury, and Alex Wennberg and MacKenzie Weegar also scored goals for the Panthers. Keith Yandle had an assist and recorded his 600th NHL point.

Andrei Vasilevskiy made 26 stops for the Lightning.

The Flyers finished yet another season without a Stanley Cup — they haven’t won one since consecutive championships in 1974 and 1975 — and this ends as one of the more disheartening ones in franchise history.

Pavel Zacha scored his 17th goal of the season and Janne Kuokkanen added his eighth to give New Jersey a 2-0 lead. The Flyers tied it 2-2 on Farabee’s 19th goal of the year and Sean Couturier’s 18th.

Bo Horvat also scored and Thatcher Demko stopped 39 shots for his 14th win of the season for the Canucks, Vancouver was eliminated from the playoff race earlier in the night when Montreal earned a point in a 4-3 overtime loss to Edmonton to clinch fourth place in the North Division.

Kyle Connor scored for the Jets, who lost for the ninth time in 10 games. Laurent Brossoit finished with 28 saves.

The teams meet again on Tuesday in Winnipeg. The Jets hold a 5-3 lead in the nine-game season series.