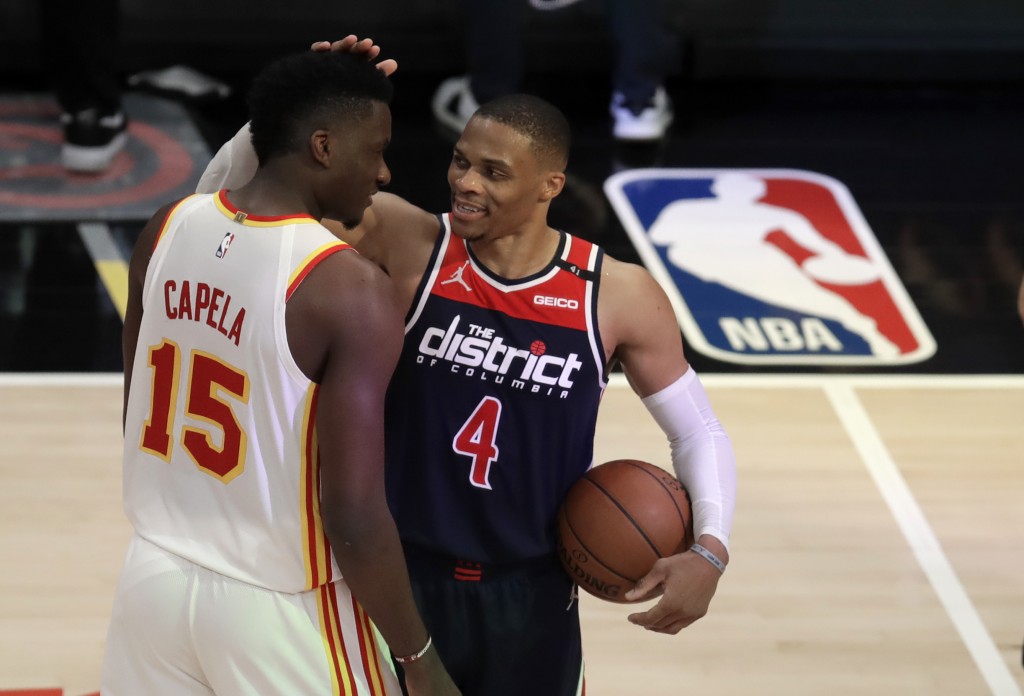 Westbrook completed his 182nd triple-double when he pulled down a rebound with 8:29 remaining. The nine-time All-Star and 2016-17 MVP finished with 28 points, 13 rebounds and 21 assists, carrying the load for a Wizards team that was missing Bradley Beal, the league’s No. 2 scorer.

Trae Young scored 36 points and John Collins added 28 for the Hawks, who moved within a half-game of the fourth-place New York Knicks in the Eastern Conference. Washington is 10th in the East, which would give the Wizards the final spot in the league’s new postseason play-in tournament.

Beal has a strained left hamstring and the Wizards said earlier Monday he would also miss the team’s next game, a rematch at Atlanta on Wednesday.

Washington called a timeout with 39.7 seconds remaining after Collins’ free throws put Atlanta up 125-122. Westbrook followed by hitting a runner and the Hawks called timeout with 18.2 seconds left. He got a clean look at a 3-pointer with 2 seconds left. His shot bounced off the rim, and Westbrook pounded the ball hard against the floor when the game ended.

Bogdan Bogdanovich finished with 25 points and Clint Capela had 22 rebounds for Atlanta, which has won four of five.

CLEVELAND (AP) — Domantas Sabonis had 21 points, 20 rebounds and nine assists as Indiana beat Cleveland and strengthened its hold on a play-in tournament spot.

Kelan Martin scored a career-high 25 points and Caris LeVert had 20 points and 10 assists for the Pacers, who moved one-half game ahead of Washington into ninth place in the Eastern Conference.

Collin Sexton scored 25 points for the Cavaliers in their 11th straight loss, matching the eighth-longest skid in team history. Rookie Isaac Okoro had 22 points and 10 rebounds and Dean Wade had 19 points and 12 rebounds in their first career double-doubles.