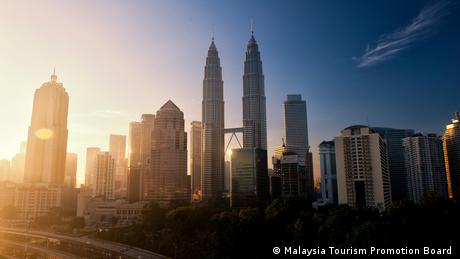 After having secured free-trade deals with Vietnam and Singapore, the European Union's sights are set on concluding more bilateral trade deals in Southeast Asia. In recent months, as the region's economies continue to be battered by a spike in COVID-19 infections, Thailand and the Philippines have expressed interest in restarting talks, while ongoing negotiations with Indonesia are moving forward.

Now, there also appears to be some progress over a free-trade pact with Malaysia, after two key industry groups last month announced that they will work together to lobby both Brussels and Kuala Lumpur to restart talks that broke down in 2012.

Talks over a free-trade agreement began in 2010 but stalled two years later, after seven rounds, at the request of Malaysia. A "stocktaking exercise" was carried out by both sides in 2016, but Kuala Lumpur decided against restarting trade talks.

Michalis Rokas, the EU ambassador to Malaysia, told DW that Brussels is committed to strengthening its engagement with the Association of Southeast Asian Nations (ASEAN), and "the chances of reengaging in trade talks rest mainly on Malaysia's willingness and ability to pursue ambitious and comprehensive trade and investment agreements."

"In that respect," he added, "we take note of the recent interest from the business community to support the resumption of negotiations."

In late April, the European Chamber of Commerce in Malaysia and the Federation of Malaysian Manufacturers agreed to form a joint task force to lobby for a restart to FTA talks.

Up until now, much of the lobbying over EU-Malaysia trade has revolved around the controversial issue of palm oil. In early 2019, the EU adopted the Delegated Regulation for its second Renewable Energy Directive (RED II), which will phase out the use of palm oil as biofuel in Europe by 2030 because of environmental reasons.

Both Southeast Asian states, which have vowed to work together to oppose the EU's decision, claim Brussels is merely engaged in "discriminatory" and "protectionist" trade practices.

The question is whether Kuala Lumpur wants to make palm oil, which accounts for less than 5% of Malaysia's total exports to the EU, an issue that prevents free trade talks from restarting, much to the detriment of other parts of the country's economy.

Statistics from Malaysian Palm Oil Council in 2019 even asserted that the EU's phasing-out measures will only impact 0.04% of Malaysia's annual palm oil production. The vast majority of Malaysia's exports to the EU — which rose from €23.5 billion ($28.6 billion) in 2018 to €27.8 billion in 2020, according to EU data — were industrial machinery and appliances, plastics, and rubber.

Frederick Kliem, a research fellow at the S. Rajaratnam School of International Studies at Singapore's Nanyang Technological University, reckons that it's merely a matter of time until trade talks are restarted. "The Malaysian side will benefit significantly more from a FTA than the European side, and the old palm oil issue, though important for domestic political reasons, will not obstruct the inevitable progress of the negotiations," he told DW.

The Federation of Malaysian Manufacturers' president, Thian Lai, said in a statement last month that considering "the impact of COVID-19, an FTA with the EU would greatly contribute to manufacturers' post-pandemic recovery and re-establishing critical supply chains." Indeed, the Malaysian economy contracted by around 5.4% last year, according to the country's central bank.

It is notable, sources said, that lobbying groups like the Federation of Malaysian Manufacturers are now involved in this issue, as it could steer the wider narrative away from the palm oil dispute and towards a greater discussion on Malaysia's post-pandemic industrial sector, which accounts for the majority of Malaysian goods exported to the EU.

"The palm oil issue is not a stumbling block for FTA negotiations to recommence," said Rokas, the EU ambassador to Malaysia. He noted that the EU and Indonesia are currently engaged in FTA negotiations, although they face the same situation concerning palm oil.

However, the palm oil dispute isn't simply over money.

According to Felix Chang, a senior fellow at the Foreign Policy Research Institute, a US-based think tank, the EU's firm resolve on this issue means restarting FTA talks will depend on how much importance the Malaysian government places on trade with the EU.

Although the economic importance of an FTA is clear, the Malaysian government has several other factors to consider, Chang told DW. Kuala Lumpur may feel that restarting trade talks before settling the palm oil dispute "would give away some degree of Malaysian leverage in negotiations."

More important are domestic concerns for Prime Minister Muhyiddin Yassin and his government, which has a precarious minority in parliament and is committed to a nationalist agenda of prioritizing the country's Muslim Malay majority, who form the bulk of palm oil owners and workers.

From independence in 1957 until 2018, Malaysia was run by one party. But the opposition and multicultural Pakatan Harapan coalition surprisingly won the 2018 general election, yet intra-coalition disputes, centered around former prime minister Mahathir Mohamad, led to its collapse in 2020.

Malaysian political pundits are still speculating on whether a snap election will be called this year, even though the next general election isn't due until 2023.

For Muhyiddin, electoral success will come from burnishing his Malay credentials, and the belief that he "sold out" the palm oil sector could be met by a backlash, come an election. Malaysia's longer-term economic interests, which would be served by a European free-trade pact, may take second place. But pressure on the Malaysian government, especially from the local business sector, is building.