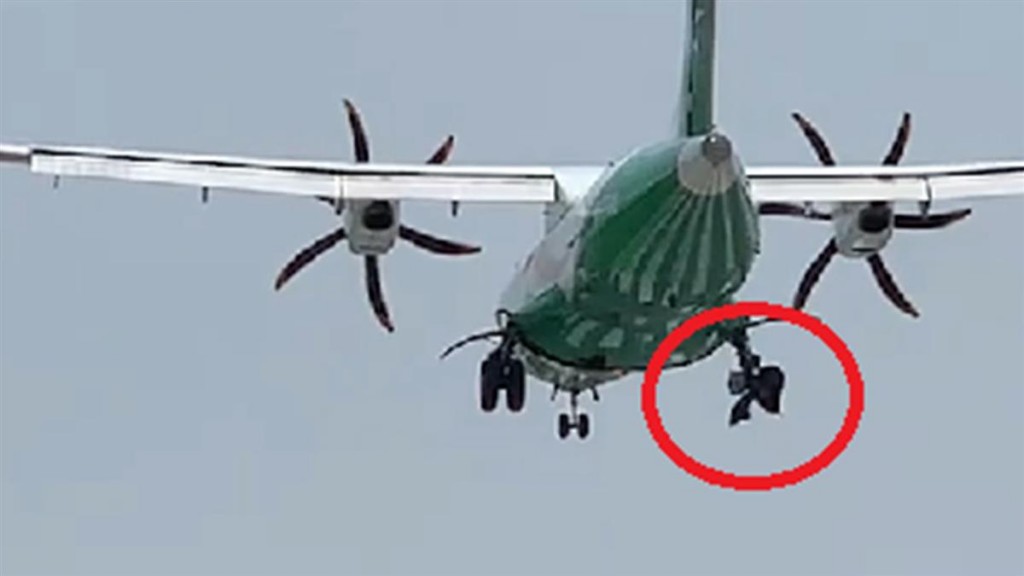 TAIPEI (Taiwan News) — A UNI Air aircraft was forced to make an emergency landing in Taipei Monday morning (May 10) after two of its tires ruptured.

UNI Air Flight B79091 took off from Taipei's Songshan Airport at 9:30 a.m. bound for Matsu, but as it prepared to land, the captain noticed two of its tires were damaged, forcing the plane to return to Taipei and make an emergency landing.

According to the Civil Aeronautics Administration (CAA), while the aircraft was preparing to land at Matsu's Nangan Airport, the captain noticed that the wheels on the right landing gear appeared to have sustained damage, and he decided to return to Taipei to make an emergency landing. Damaged tires on right side of plane. (PTT photo)

Once back over Songshan Airport, he asked the tower to assist in guiding the landing. The Taiwan Transportation Safety Board (TTSB) dispatched fire trucks to the scene.

However, the plane landed smoothly at 11:08 a.m., reported EBC. All 74 passengers and crew members are reportedly unharmed.

The CAA immediately dispatched personnel to the scene to inspect the aircraft and found that the No. 3 and No. 4 right wheels had ruptured, reported CNA. Songshan Airport has temporarily halted operations, as the plane is still on the runway awaiting further inspection by TTSB personnel.