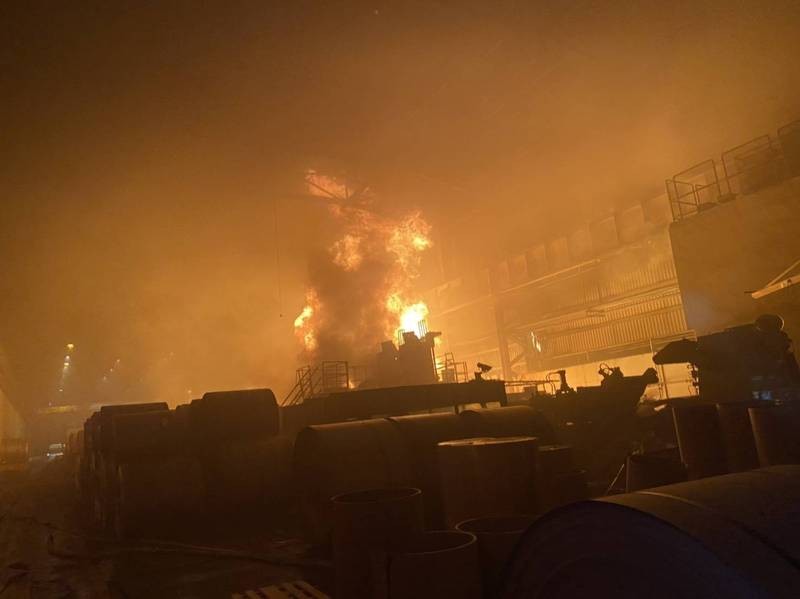 TAIPEI (Taiwan News) — A massive blaze broke out at a steel plant in Kaohsiung Sunday evening (May 9), injuring one and halting operations at the facility.

The Kaohsiung City Fire Department at 9:07 a.m. received a report that a fire had broken out at the Yieh United Steel Corp. (燁聯鋼鐵) plant in Gangshan District. It immediately dispatched 38 vehicles and 81 firefighters from a dozen fire stations to the scene. When firefighters arrived at the factory, they found that a 70,000-liter storage tank full of grinding oil had burst into flames, reported Liberty Times. Firefighters used foam to contain the blaze in the tank while spraying water in the surrounding area to prevent the flames from spreading.

They managed to bring the inferno under control by 11:20 p.m. and fully extinguished it at 11:39 p.m, reported Newtalk. A total of 400 square meters had been damaged. During the fire, a 49-year-old male employee suffered smoke inhalation and burns to his hands, and he was rushed to a nearby hospital. Doctors said his injures were not life-threatening and that he is in stable condition. Based on a preliminary investigation, the fire was the result of "careless operation." Chen has ordered the plant to suspend operations while an investigation is carried out.