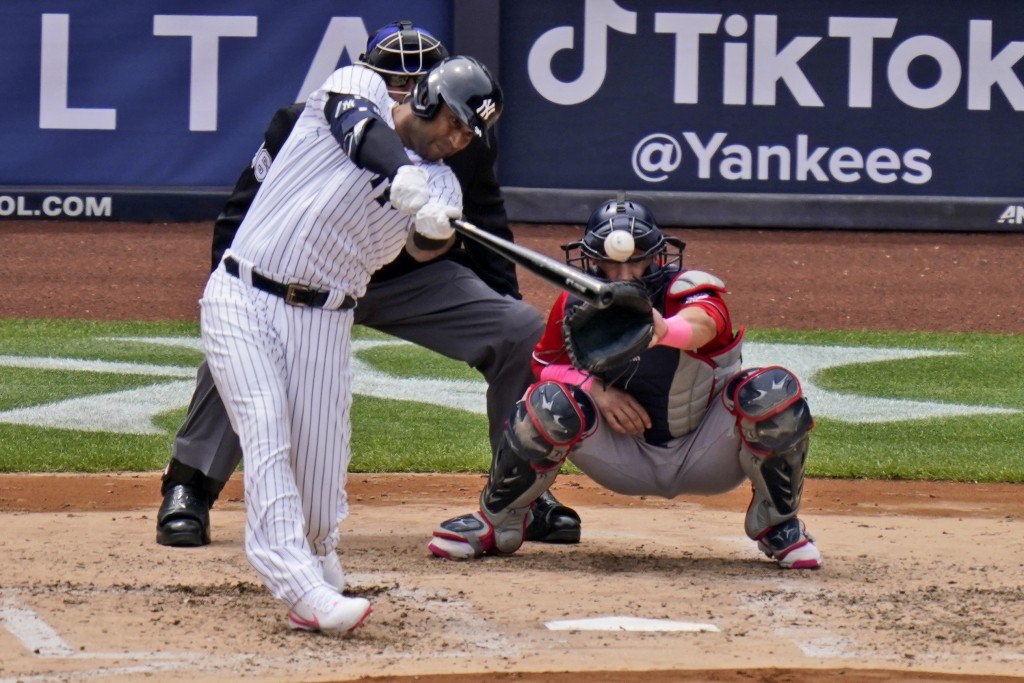 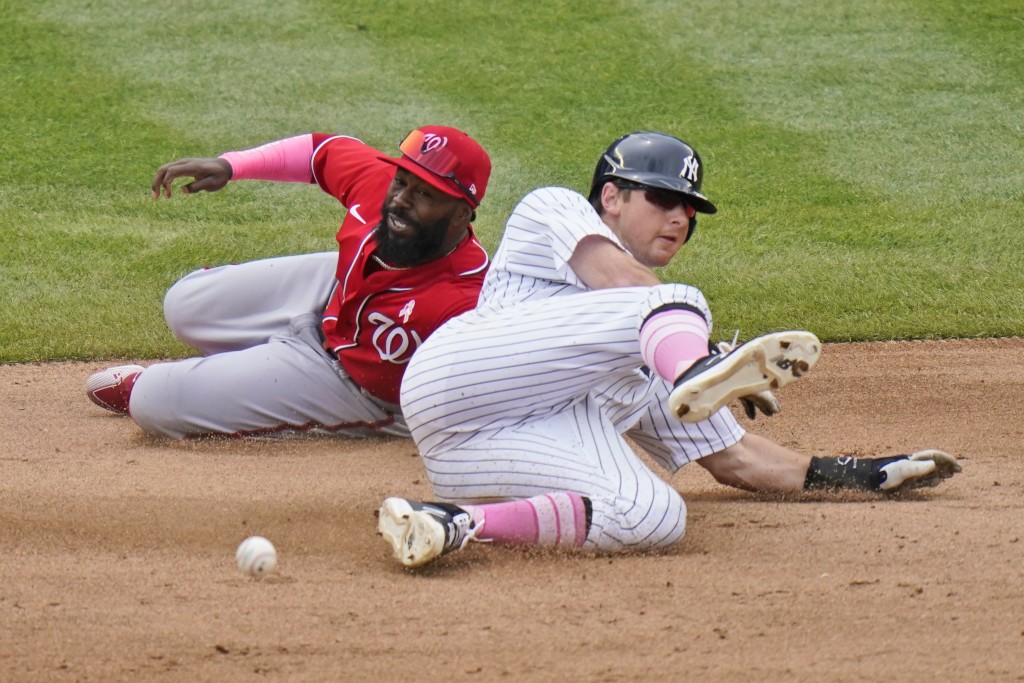 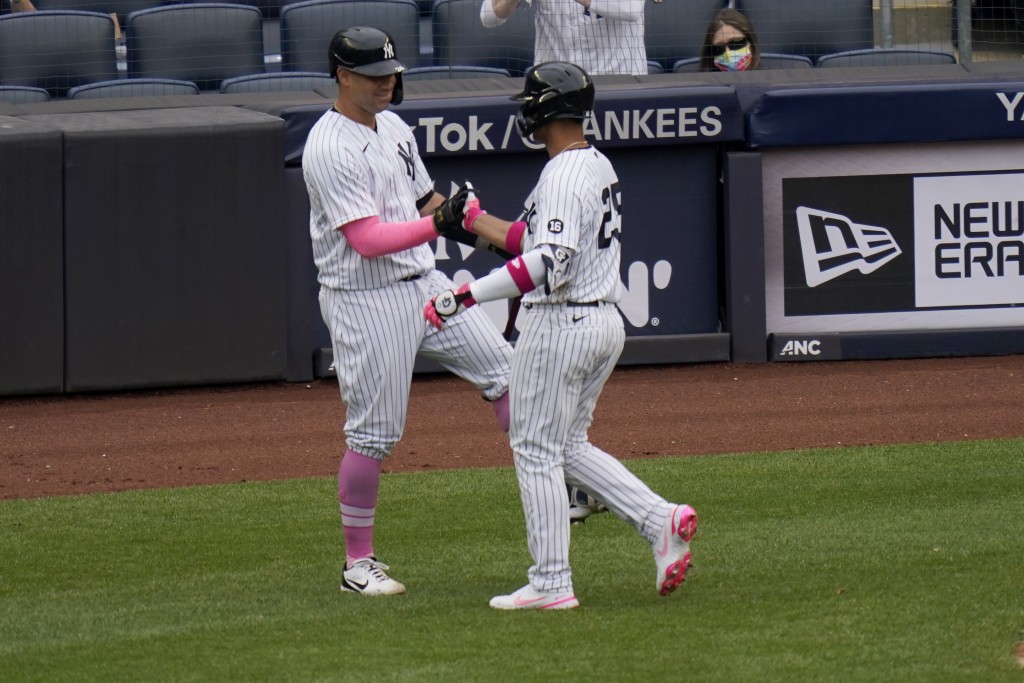 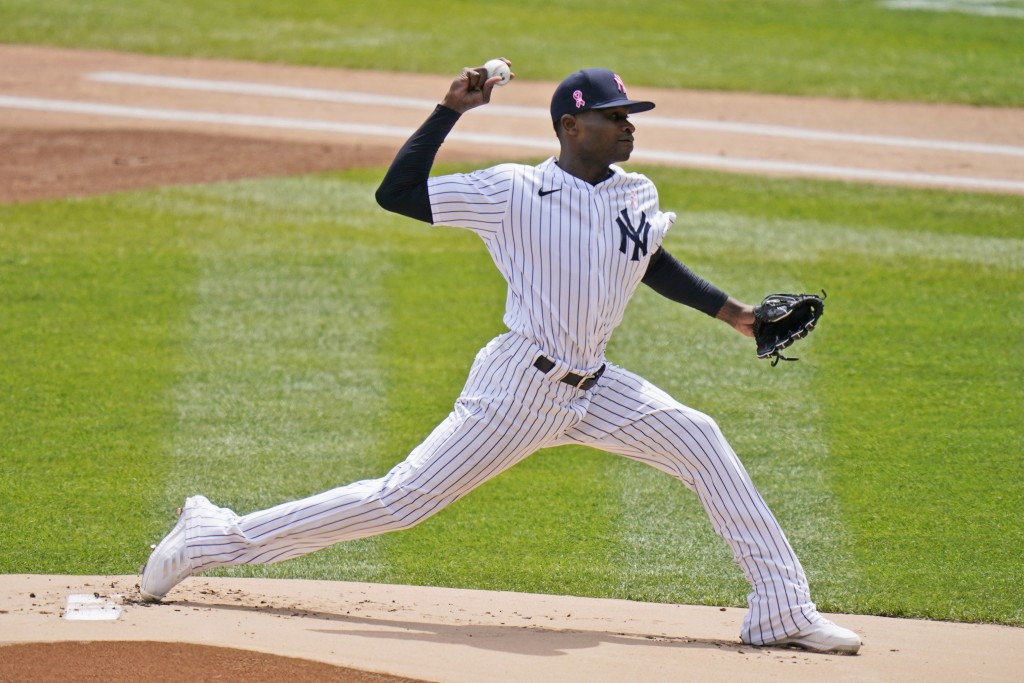 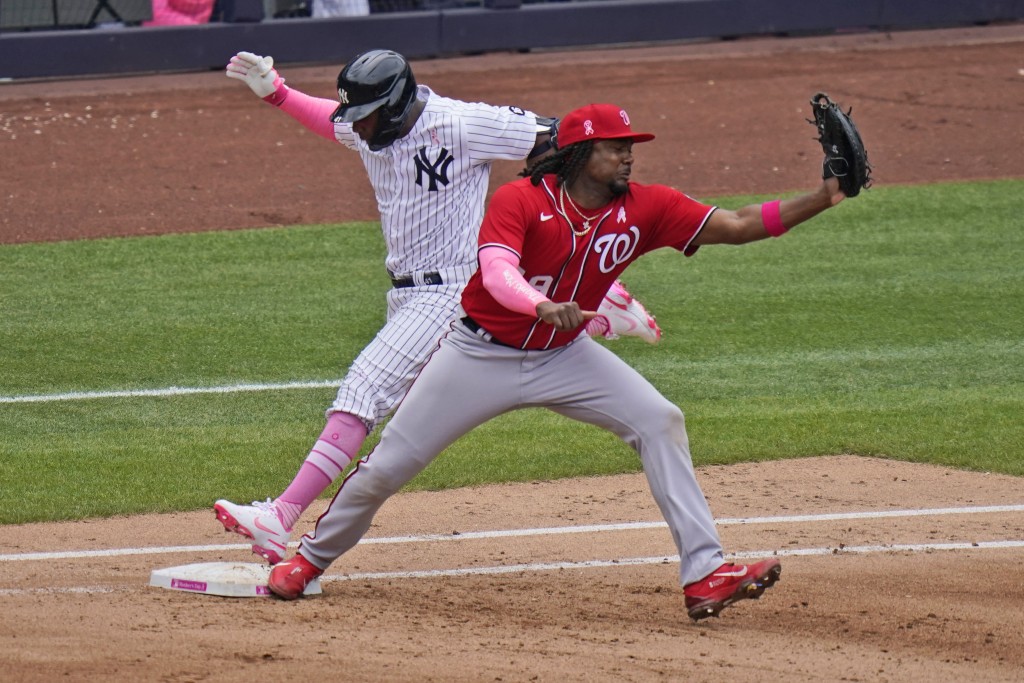 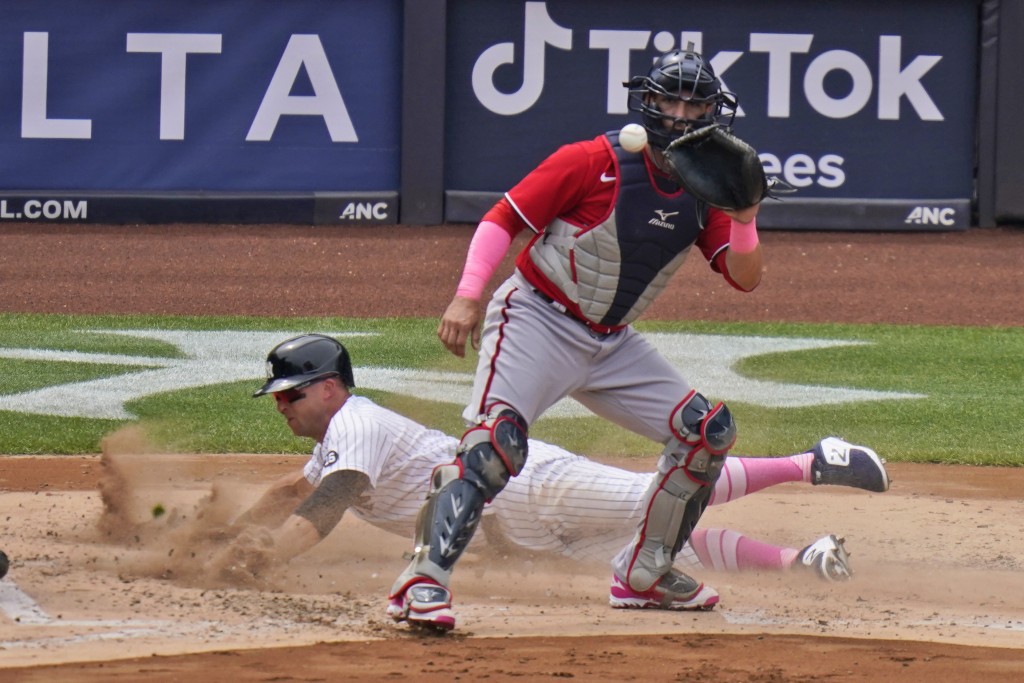 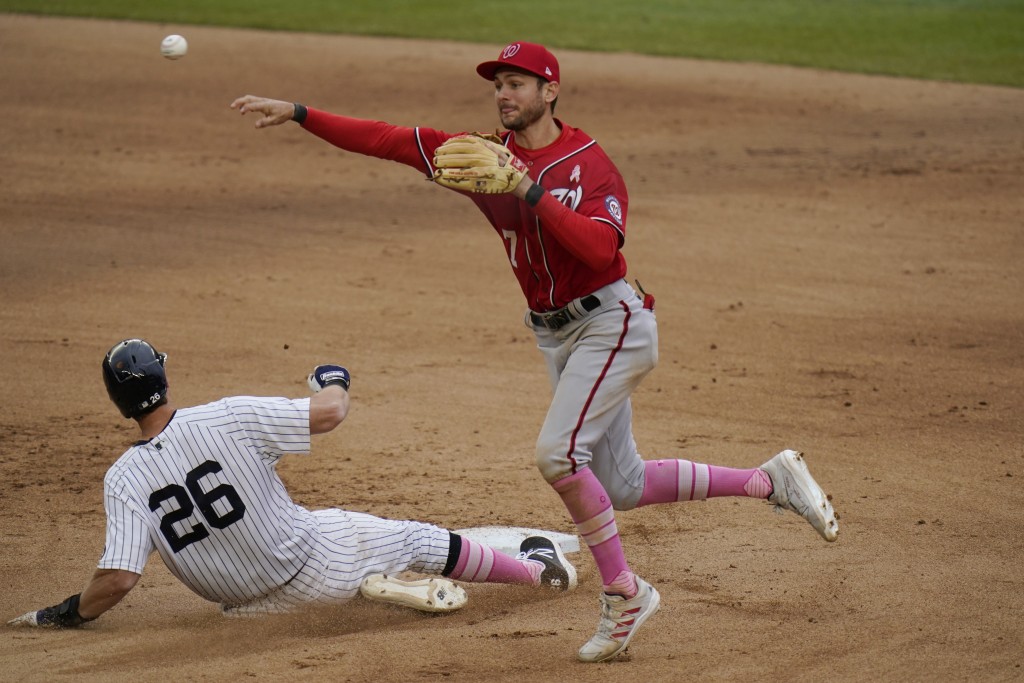 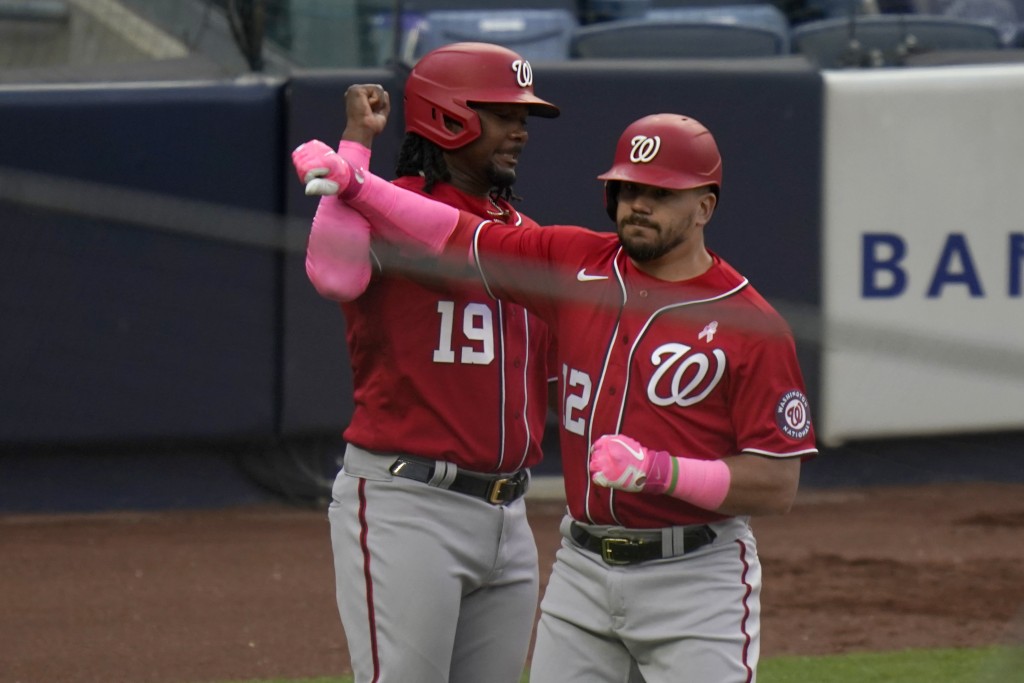 NEW YORK (AP) — Giancarlo Stanton hit a game-ending single off Brad Hand in the ninth inning, and the New York Yankees beat Washington 3-2 Sunday for their second straight walk-off win over the Nationals.

Hand (2-1) walked Tyler Wade and pinch-hitter Aaron Judge starting the ninth, a day after walking his first batter and blowing ninth- and 10th-inning leads in a game New York won 4-3 in 11 innings.

DJ LeMahieu hit into a forceout that left runners at the corners, just beating a throw to first to avoid a double play.

Stanton lined a slider into left field for his 24th RBI this season and was mobbed by teammates at first base, just the fifth hit of the game for the Yankees.

New York went 7-2 on its longest homestand of the season, improving to 18-16.

Michael King, Wandy Peralta and Aroldis Chapman (2-0) combined for 2 2/3 innings of scoreless, three-hit relief. King got four outs to remain unscored upon in 12 1/3 innings this season.

New York built a 2-0 lead on Aaron Hicks’ RBI single in the third and Gleyber Torres’ solo homer in the sixth, a 411-foot drive into the left-field bleachers. Torres hit his first home run in 136 plate appearances this season and first since last Sept. 17 against Toronto. A day earlier, his 11th-inning single bounced just 50 feet to give the Yankees a 4-3 win.

Kyle Schwarber tied the score in the seventh with a two-run homer into the right-field second deck on Domingo Germán’s final pitch. Josh Bell had doubled leading off, ending a string of strikeouts in seven straight at-bats.

A day after returning to right field for the first time since April 19, Juan Soto was 0 for 4 as the designated hitter and dropped to 2 for 12 in the series.

Stanton took his lead off third in the middle of the coach’s box with Gary Sánchez batting in the third inning, so far into foul territory that coach Phil Nevin backed away.

Yankees: 1B Luke Voit (left knee surgery March 29) probably will be activated for Tuesday’s game at Tampa Bay. Voit, who was 5 for 13 coming in, hit his third homer and had a two-run double for Triple-A Scranton/Wilkes-Barre at Syracuse. ... Judge, in a 2-for-24 slide and dealing with what manager Aaron Boone called “lower leg stuff,” was given the day off ahead of Monday’s off day. “Just trying to be proactive,” Boone said. “Hopefully this is something that keeps him strong physically.” ... 3B Gio Urshela (sore left knee) and 2B Rougned Odor (sprained left knee on May 4) took grounders before the game. Urshela could be back in the lineup Tuesday.